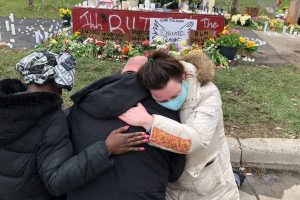 BROOKLYN CENTER, Minn. — Communities across the nation marched and mourned Tuesday in memory of Daunte Wright, a 20-year-old Black man who was fatally shot by a police officer after a traffic stop over the weekend.

More than two dozen prayed and paid respects in the freezing weather at the memorial erected Monday night where Wright was killed — a giant, rust-brown sculpture of a clenched fist, surrounded by flower bouquets, messages and candles.

Samuel Howell, 65, from Princeton, Minnesota, fell to his knees and began to weep at the sight. He told USA TODAY that he is a former cop from San Bernardino, California, but that his son-in-law is Black.

Two women comforted and hugged him, saying that “we’ll get through this together.”

“The whole community feels helpless,” said Katie Russell, 34, from Brooklyn Park. “All we can do right now is comfort each other.”

Across town, a small group of protesters gathered at the Brooklyn Center Police Station, where just hours before, Officer Kim Potter, who fatally shot Wright, and the city’s police chief resigned.

Wright’s death on Sunday has shaken a nation already unsettled by a series of police killings.

‘You can’t train them once’: Taser confusion errors like Daunte Wright shooting are rare but avoidable, experts say

George Floyd died about 10 miles away during a police arrest last May, an incident that led to nationwide protests calling for an end to racial injustice and police brutality. Brooklyn Center is not far from where former police officer Derek Chauvin is on trial in Floyd’s death.

About a six-hour drive from where Wright died, the Kenosha, Wisconsin, police officer who shot Jacob Blake, a Black man who was paralyzed from the waist down after the shooting in August, has returned to regular duty and won’t face any administrative discipline.

On Tuesday, Chief Daniel Miskinis issued a news release on Twitter stating that Rusten Sheskey has also been cleared of breaking any internal policies, and has been back on duty after months of administrative leave since March 31.

As Brooklyn Center mourned, other cities around the country had already started protesting.

Several dozen people marched through downtown Chicago Tuesday evening, calling for justice for Daunte Wright and Adam Toledo, a 13-year-old boy fatally shot by a Chicago police officer at the end of March. According to videos of the demonstration shared on social media, protesters could be heard chanting: “Say his name, Daunte Wright!”

Both Brooklyn Center and the Twin Cities issued a curfew from 10 p.m. Tuesday to 6 a.m. Wednesday.