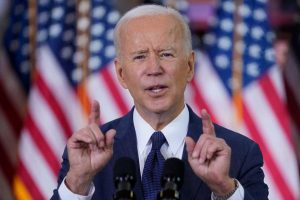 The claim: President Joe Biden’s approval rating is at 11%, the lowest of any president in American history

President Joe Biden already has tangled with members of both parties over the U.S. response to the COVID-19 pandemic, immigration and infrastructure since his inauguration less than three months ago.

But his approval rating is not at an historic low, as a viral social media post suggests.

“The LOWEST approval rating of ANY president in American history,” it claims.

That claim is false. Gallup has measured Biden’s approval rating at an average of 56% in three polls since he was sworn in Jan. 20. It’s nowhere near the lowest Gallup poll in history.

Gallup first began measuring approval ratings for presidents in 1938. It used face-to-face interviews until 1989, when it began conducting all of its polls by telephone, a practice it maintains today.

In 2008, Gallup began dialing cell phones as well as landlines, though most interviews still are done on landlines.

The earliest available data on Gallup’s online presidential approval tracker was for Truman in June of 1945, when about 87% of those polled approved of the job he was doing as president. Truman also has the distinction of charting the lowest approval rating since 1945: 22% in February 1952.

Few presidents have seen their approval ratings fall below 30% in the Gallup poll.

After soaring to a 90% approval rating after the terrorist attacks of Sept. 11, 2001, President George W. Bush cratered to 25% in the waning months of his presidency in 2008. President Richard Nixon’s approval rating bottomed out at 24% just before his resignation in 1974 during the Watergate scandal.

President Donald Trump’s approval ranged from 34% to 49% during his presidency, according to Gallup.

Gallup noted in an analysis of its most recent approval rating poll an “extreme polarization in approval ratings” under Trump that has so far continued during Biden’s presidency.

“Biden is enjoying a modest honeymoon early in his presidency, with his approval ratings to date still above the historical average of 53% rating for presidents,” Gallup said. “His honeymoon is being driven by near-unanimous approval among his fellow Democrats and majority approval among independents, with the vast majority of Republicans disapproving from the start.”

The post attributes the approval rating to reporting by the Daily Caller about a Gallup poll.

That poll is separate from Gallup’s measurement of presidential approval ratings. The “Mood of the Nation” poll was conducted from Jan. 4-15, before Biden’s inauguration but during the Jan. 6 riot at the U.S. Capitol.

The all-time low in the satisfaction poll was 7% in 2008, according to Gallup.

“The COVID-19 pandemic gripping the nation is clearly a factor in the very low satisfaction reading – as are the tensions caused by President Donald Trump’s failure to recognize the election results and the Jan. 6 invasion of the U.S. Capitol, and the fact that the January reading came at a time of transition in the transfer of power,” according to Gallup’s analysis of the poll.