Delta reports profit since 2019 thanks to federal aid, improving revenue as travelers return 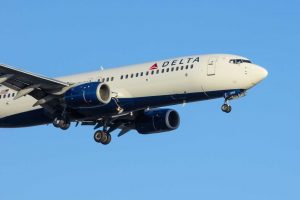 The Atlanta-based airline posted a profit of $652 million, snapping a five-quarter streak of losses, thanks to federal coronavirus aid that offset some of its costs.

Delta shares were up 1.5% in premarket trading after it released results.

While still hamstrung by weak international air travel, revenue will continue to improve compared with recent months, Delta said. For the third quarter, Delta said it expects revenue will be down 30% to 35% over 2019, when it brought in $12.56 billion.

Delta and some other airlines often compare their results to 2019 before the pandemic since the virus had created such dramatic shifts in demand last year.

The airline said domestic leisure travel has completely recovered and that business travel demand was also recovering. Average daily net cash sales — tickets purchased minus refunds — doubled over the first quarter and were 20% higher than its initial forecast.

It's a sharp turnaround for Delta, which reported a record loss of $12.4 billion last year. Other airlines have also become more upbeat.

American Airlines said late Tuesday that it could post a "slight" pretax profit for the second quarter and said revenue will likely come in higher than expected.

The sharp rise in demand has been rocky for airlines — and passengers. Thousands of employees took leaves of absence or early retirement packages at executives' urging last year, leaving some carriers short of trained pilots, customer service agents and other employees as demand spiked. The federal aid prohibited airlines from laying workers off outright.

Delta said last month it will ramp up hiring of more than 1,000 reservation agents and plans to hire roughly 1,000 pilots over the next year.

Delta is the first of the U.S. carriers to report second-quarter results. American, United Airlines and Southwest Airlines are scheduled to report next week.

Here's how Delta performed in the second quarter compared with what Wall Street expected, based on average estimates compiled by Refinitiv:

"Looking forward, we are harnessing the power of our differentiated brand and resilient competitive advantages to drive towards sustainable profitability in the second half of 2021 and enable long-term value creation," CEO Ed Bastian said in the earnings release.

Delta had $17.8 billion in liquidity at the end of the quarter and total debt and lease obligations of $29.1 billion.

Delta said its third-quarter capacity will be down 28% to 30%. Its capacity was down 32% in the second quarter, though the airline was blocking middle seats until May 1.

Delta late Monday announced it was adding used aircraft to grow its fleet: leasing seven Airbus A350 wide-body planes and buying 29 Boeing 737-900ERs. Its said its 2021 gross capital expenditures would total around $3.2 billion.