Democrats call on oil companies to testify on climate disinformation 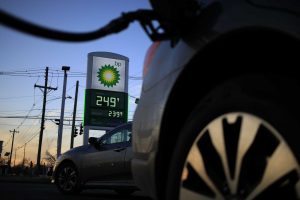 The House Oversight Committee on Thursday expanded its investigation into the fossil fuel industry's involvement in spreading disinformation about the role fossil fuels play in causing climate change.

Oil and gas companies have faced a slew of lawsuits from cities and states across the U.S. over their investments in campaigns to undermine climate policy and downplay the impact of burning fossil fuels on global warming.

The probe also comes as Democrats look to pass major climate and clean energy policy in the budget reconciliation bill, efforts that have faced opposition from some fossil fuel companies.

In letter to the companies and groups on Thursday, the committee requested documents on the reported role of the oil and gas industry in a long-term branding and lobbying campaign to spread to spread climate disinformation and undermine climate policy.

The five biggest public oil and gas companies — Exxon, Shell, Chevron, BP and Total — spent $1 billion to promote misleading climate-related branding and lobbying between 2015 and 2018, according to a report from climate lobbying group InfluenceMap that the committee cites in its letter.

"We are deeply concerned that the fossil fuel industry has reaped massive profits for decades while contributing to climate change that is devastating American communities, costing taxpayers billions of dollars, and ravaging the natural world," read the letter to Darren Woods, CEO of Exxon.

"We are also concerned that to protect those profits, the industry has reportedly led a coordinated effort to spread disinformation to mislead the public and prevent crucial action to address climate change," the letter read.

Read more about how businesses and consumers are fighting and adapting to climate change:

Living on the front lines of climate change: Victims of fire and flood tell their stories

Climate migration is already happening — for homeowners who can afford it

In areas hit hard by climate change, only the rich can afford to stay

The committee also asked executives to produce documents related to disinformation by the end of the month and confirm by Sept. 23 whether they plan to appear at the hearing.

Matt Letourneau, a spokesman for the U.S. Chamber of Commerce, said the committee's leadership "has a fundamental misunderstanding" of the chamber's position on climate change and work to forge solutions.

"The Chamber believes that the climate is changing, that humans are contributing to those changes, and that inaction on climate is not an option," he said. "We know that durable policy is made through bipartisan action, so we've been working hard with members of Congress from both sides of the aisle to enact climate solutions."

The other recipients of the letters didn't immediately respond to CNBC's request for comment.