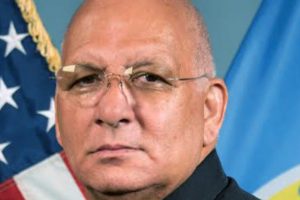 Marty Walsh, the city’s former mayor, appointed White as police commissioner in one of his final acts before becoming U.S. Secretary of Labor.

In February, two days after White was sworn in, he was suspended over accusations of domestic abuse, including hitting and threatening to shoot his ex-wife, as well as hitting and pushing other family members. Details of the claims were released in a report from an independent investigation obtained by the Washington Post and provided to the city April 29.

This undated photo provided by the City of Boston on Thursday, Jan. 28, 2021 shows Dennis White, who Mayor Marty Walsh appointed as the 43rd Commissioner of the Boston Police Department. On Monday, June 7, White was fired following a bitter battle to keep his job after decades-old domestic violence accusations came to light. (Photo: AP)

“These disturbing issues were not known to me or my staff, but should have been at the forefront,” Walsh told the Boston Globe. “Upon learning of these serious allegations, I immediately acted.”

White has denied the allegations, telling investigators he hit a niece in self-defense and that he and his ex-wife had pushed each other.

White’s lawyer, Nicholas B. Carter, said in a statement to USA TODAY he is “deeply disappointed” by Janey’s decision and called the investigation biased.

“He is a Black man, falsely accused of crimes, not given a fair trial or hearing, and then convicted, or terminated which is the equivalent here,” Carter said in the statement. “This reflects an ugly pattern in our country.”

Carter claimed investigators did not interview two of White’s daughters, who he said gave sworn testimony that White’s ex-wife was a “violent serial abuser” and that the allegations against White are false. Carter said White intends to file a civil rights claim.

The former couple’s other daughter has said her mother was abused “emotionally, mentally, and physically,” according to the Boston Globe.

“It is clear that Dennis White’s return as commissioner would send a chilling message to victims of domestic violence in our city,” she said.

The April 29 independent report on White detailed allegations dating back decades from White’s ex-wife, who was also a Boston police officer, and other family members and witnesses. White’s ex-wife alleged he pushed and hit her and threatened to shoot her, according to the report. She kept a journal during their marriage and gave it to a relative, who told investigators that White’s ex-wife told them, “if anything happens to me, I want you to have this diary …. If anything happens to me, it would be Dennis.”

A friend of White and his ex-wife told police that, after a confrontation with his ex-wife and another person, he said he “wanted to shoot both of them.” White told police he was “joking around” and would not act on it.

A witness told police they had seen the ex-wife with a busted lip, scars, cuts and scratches from fights.

Witnesses said White’s ex-wife was “very private” about their relationship, according to the report. One witness said her “whole demeanor changed” if White looked in her direction. Another witness said she told her about specific instances of abuse, including allegations that White burned her hair, put her face to a stove and stepped on her face.

The report also states White’s daughter said her father once told her he sleeps with a gun under his pillow.

White’s ex-wife obtained a restraining order in May 1999, according to the report. The Boston Globe reported the order required White to leave his home, stay away from his wife and children and surrender his service weapon. The newspaper could not find evidence of any charges against White and reported that, at the time, he denied abuse allegations in court.

The report stated the police department’s internal affairs division looked into allegations of domestic violence in 1999 and sustained a finding for “neglect of duty and unreasonable judgment.”

The report also describes an altercation between White and a niece over the niece owing White $10. The niece alleged that White punched her, threw her down the stairs, and pushed her out of the front door. White denied pushing he down the stairs and told the police department’s internal affairs division that his niece charged and he pushed back and struck her in self-defense. The internal affairs division did not sustain the complaint over the incident.

On Monday, Janey said she would launch a national search for a commissioner and hopes to name one toward the end of the year. She also announced plans for vetting and background checks for candidates for leadership positions.

“The residents of Boston must have confidence that the officers charged with enforcing laws are themselves people of integrity,” Janey said.