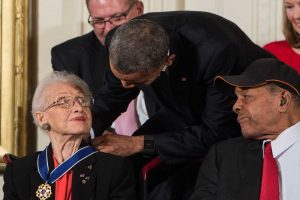 A Virginia middle school once named after a Confederate soldier officially has been renamed to honor Black NASA mathematician Katherine Johnson.

The Fairfax school had been called Sidney Lanier Middle School for the past 60 years, named after the American poet who was also a private in the Confederate army. In September 2020, the city school board decided to get rid of Lanier’s name after a majority of residents wanted the name changed.

Community members submitted over 300 new names for the school, and on Nov. 2, 2020, the district approved renaming the school after Johnson. Other names considered included Maya Angelou, Fairfax Woods, Legacy Independence and City.

“Her contributions continued to serve the nation and helped ensure that the ‘Eagle had landed…and landed safely,'” said city school board member Jon Buttram in November. “So, I think it appropriate that the name Katherine Johnson for our middle school will inspire new generations of ‘Eagles’ for our community, and I look forward to watching them fly.”

‘It’s the right thing to do’: Florida school board votes to rename 6 Confederate-named schools

The name, Katherine Johnson Middle School, was approved for the 2021-22 school year and became official during a ceremony on Friday, with Johnson’s family in attendance.

“We’re elated that they’ve chosen her names out of so many other names,” Valerie Johnson, Katherine’s niece and a Fairfax County Public Schools math resource specialist, told ABC Washington. “She had very humble beginnings, she wasn’t a prideful person, and she never really let people know about all her accomplishments. Even as a child, I did not really understand the magnitude of her work, but as I became an adult I learned about her great and important work at NASA and the fact that she really had superpowers, they were passion, perseverance, and courage.”

Hired by NASA in 1953, Johnson is famous for her role in the orbital mission of John Glenn in 1962. Before his flight, Glenn personally asked NASA to have Johnson run the numbers and equations in the computer by hand on her desktop mechanical calculating machine. She also did the calculations for the Apollo moon missions.

Johnson’s story was portrayed in the 2016 film “Hidden Figures,” where she was played by Taraji P. Henson. The film also told the stories of other Black pioneers at NASA in Dorothy Vaughan and Mary Jackson.

Johnson retired in 1986, and in 2015, at age 97, she was awarded the Presidential Medal of Freedom, the United States’ highest civilian honor, by President Barack Obama. She died at the age of 101 in Feb. 2020.

The renaming of the school is one of the numerous steps that have occurred in the past year across the country as social activists call to remove statues or school names with racist ties. Earlier this month, a Florida school board voted to rename six schools named after Confederate army members.