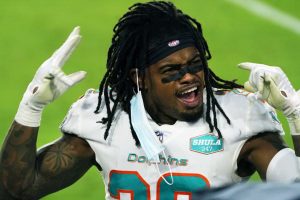 Bobby McCain, who exceeded all expectations as a fifth-round Dolphins pick, first as a slot corner and later as a free safety, is being released by the club.

McCain played six season for the Dolphins and will be remembered as a fiery, scrappy and determined overachiever.

But because the Dolphins could save $5.66 million off the salary cap by releasing him, the team made the decision to let go of a captain.

McCain did not resist the transition from corner to deep safety implemented by coach Brian Flores and defensive coordinator Josh Boyer.

In fact, McCain became a core player in relaying Flores' messages about trust and accountability to teammates and in the media.

After some rough spots in his first season at free safety, McCain actually performed quite well in 2020.

McCain was generally better in deep ball coverage than open-field tackling. But at times he was put in tough spots as a converted slot playing at 5-foot-11, 192 pounds.

The Dolphins have several other options at safety. Miami has veterans Eric Rowe and second-round pick Jevon Holland as potential starters. The Dolphins also used a third-round pick on Brandon Jones last season.

Miami also recently had a free agent visit with Malik Hooker, a former first-round safety who can play deep safety with range.