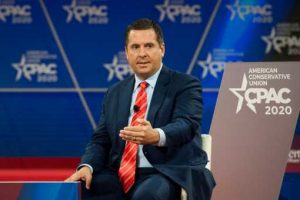 UPDATE, 10:44 AM PT: The White House said that the Presidential Medal of Freedom was awarded to Devin Nunes in a ceremony on Monday morning. No pool reporters were present for the event.

PREVIOUSLY: Donald Trump will award the Presidential Medal of Freedom to one of his staunchest supporters on Capitol Hill: Devin Nunes, who represents a Central California district.

The award is the highest civilian honor, and is presented to “individuals who have made especially meritorious contributions to the security or national interests of the United States, to world peace, or to cultural or other significant public or private endeavors.”

The White House said in a statement, “Congressman Nunes pursued the Russia Hoax at great personal risk and never stopped standing up for the truth.  He had the fortitude to take on the media, the FBI, the Intelligence Community, the Democrat Party, foreign spies, and the full power of the Deep State. Devin paid a price for his courage. The media smeared him and liberal activists opened a frivolous and unjustified ethics investigation, dragging his name through the mud for eight long months.”

Nunes was the former chairman of the House Intelligence Committee. The House Ethics Committee opened an investigation in 2017 as to whether Nunes had violated rules regarding the public disclosure of classified information. The committee closed its investigation later that year without taking any action. Trump has repeatedly called Special Counsel Robert Mueller’s Russia investigation a “hoax.” Mueller was unable to find a conspiracy between the Trump campaign and Russian interests, but also said that while his report “does not conclude that the President committed a crime, it also does not exonerate him.”

Nunes has sued a number of media outlets, including The Washington Post and CNN, as well as Twitter. Last month, a federal judge tossed a Nunes lawsuit against the Post, concluding that his complaint did not plausibly allege that the publication acted with actual malice.

There also were reports that Trump planned to present the award to another congressional supporter, Rep. Jim Jordan (R-OH), who vigorously defended the president’s conduct in the impeachment hearings in 2019.

The Presidential Medal of Freedom was established by President John F. Kennedy. Trump has given 19 medals, including to posthumous recipients such as Elvis Presley and Antonin Scalia, and to sports figures including Tiger Woods and Lou Holtz. He presented the medal to Rush Limbaugh during last year’s State of the Union address.