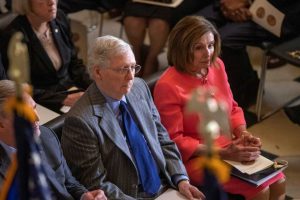 The claim: Only 4% of Americans are millionaires compared with 51% of Congress

A viral Facebook post from July 2019 that has found renewed life online tries to illustrate that point, but it misses the mark on a key detail.

The meme says only 4% of Americans are millionaires, compared with 51% of members of Congress, adding, “Remember this when a politician talks about income inequality.”

The claim was first posted on July 23, 2019, and it has been shared about 180,000 times as of June 8. But it saw a surge in activity almost two years later, with commenters debating its accuracy (and why public officials are disproportionately wealthy).

Not so fast. While the Center for Responsive Politics estimates indeed show the majority of members of Congress have a net worth of more than $1 million, the post is off about the general population.

Fact check: Nadler, Pelosi and Schiff next up for reelection in 2022

Millionaires in the U.S.

Credit Suisse estimates that about 8% of American adults are millionaires. (Photo: Getty Images)

Credit Suisse publishes an annual report that analyzes, among other things, the number of millionaires across the world.

The U.S. had about 17.4 million of the globe’s 42.2 million millionaires in 2018, the report that would have been current at the time of the viral Facebook post.

At that time, the U.S. adult population was about 243 million, meaning about 7.2% of American adults were millionaires. If children are included as well, the U.S. population increases to 326 million in 2018; 5.3% would have been millionaires.

More recent data suggest the proportion of millionaires in the U.S. is even higher, though the specifics vary by source.

The user who shared the post did not respond to a request for additional evidence to support the claim.

The 1996 book “The Millionaire Next Door” determined about 3.5% of the 100 million U.S. households at the time had a net worth of more than $1 million. That’s not the same figure in the Facebook meme, but it’s the closest estimate USA TODAY could find to what is asserted in the claim.

Compared with the overall population, Congress is made up of a disproportionate share of millionaires. But determining the number of wealthy people in Congress is more complicated.

Members of the House of Representatives and the Senate are required to file financial disclosure forms that are publicly available, but they do not report a precise accounting of their wealth. Instead, they report the value of assets and liabilities in ranges.

Personal residences not held for investment purposes and some other large assets also don’t have to be disclosed.

Fact check: Rep. Alexandria Ocasio-Cortez’s net worth is not close to $1 million

The Center for Responsive Politics compiles those reports in a list to determine the wealthiest members of Congress, based on the average between the high- and low-end estimates of their net worth.

That works out to about 52% — slightly off from the 51% in the Facebook meme, but close.

Sen. Mark Warner, D-Va., was the wealthiest member of Congress in 2018 with an average of $214 million to his name, according to OpenSecrets. House Speaker Nancy Pelosi, D-Calif., ranked No. 7, and Senate Minority Leader Mitch McConnell, R-Ky., ranked 21st in the 2018 data.