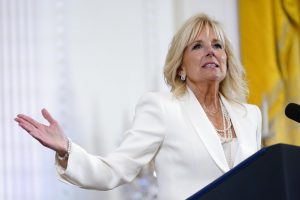 First Lady Jill Biden has tested positive for Covid, just over a week after her husband President Joe Biden returned to public events after contracting the virus.

Elizabeth Alexander, the first lady’s communications director, said in a statement, “After testing negative for COVID-19 on Monday during her regular testing cadence, the First Lady began to develop cold-like symptoms late in the evening. She tested negative again on a rapid antigen test, but a PCR test came back positive.”

Alexander said that the first lady has been prescribed a course of Paxlovid and is experiencing “only mild symptoms.” She said that Biden will isolate from others for at least five days and close contacts will be notified.

President Joe Biden tested positive last month and, after being treated with Paxlovid, experienced a rebound of the virus.

The Bidens have been vacationing in Kiawah Island. since last week The president is scheduled to return to the White House on Tuesday to sign the Inflation Reduction Act, and then fly out later in the day to their home in Wilmington.

The president tested negative on August 7, about two weeks after first testing positive. He also isolated and, after about six days, began to return to a public schedule. But he tested positive again on July 30, and returned to isolation until a week later.