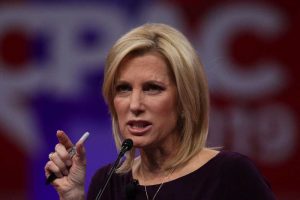 Fox News host and longtime Trump sycophant Laura Ingraham believes voters might feel it’s time to “turn the page” on the former president and opt for “someone who has all of Trump’s policies who’s not Trump.”

In a Monday appearance on the Truth with Lisa Boothe podcast, Ingraham discussed the potential response to a third presidential bid by Trump, and warned that the country was “exhausted” by the “constant battle” Trump represents.

For Trump, the loyalty of Fox hosts is a bellwether of his perception amongst Americans generally. Rolling Stone reported last month that the former president has obsessed over his performance in the “Fox News primary,” going so far as to keep lists of which on air personalities are “for” or “against” him. Sources indicated that Trump felt Ingraham might not support him in 2024, while Sean Hannity’s loyalty was secure. Hannity on Monday claimed Trump could still run for president even with a felony conviction.

Ingraham casting doubt on Trump’s 2024 prospects comes a week after the FBI raided Trump’s Mar-a-Lago home and seized dozens of boxes of evidence in relation to an investigation into potential violations of the Espionage Act. In a reaction to the raid, Ingraham expressed skepticism about what Trump could actually do to curb the effects of the investigation.

Trump’s paranoia over his 2024 election chances have grown considering there’s another potential  candidate who may be able to do Trumpism as well as him but without the legal baggage: Florida Governor Ron Desantis. Since Trump’s failed bid for reelection in 2020, DeSantis has emerged as a standard bearer for Trumpism, and been lauded by Fox personalities (including Ingraham) for his efforts. With Trump facing a slew of legal issues, including the recent raid of Mar-a-Lago, longtime allies may be hedging their bets and weighing who is the Trumpiest option who isn’t Trump himself.