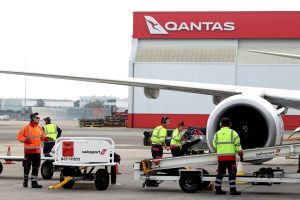 London (CNN Business)Australian airline Qantas has asked its senior executives to help out as airport baggage handlers as it struggles to manage a staff shortage.

The airline has called on at least 100 senior staff to join its outsourced ground handling teams at Sydney and Melbourne airports for three months.
“The high levels of winter flu and a Covid spike across the community, coupled with the ongoing tight labor market, make resourcing a challenge across our industry,” Colin Hughes, Qantas’ chief operating officer, said in a note sent to staff and shared with CNN Business on Monday.

Staff who accept the temporary arrangement will be expected to sort and scan bags, load them into aircraft and drive them around the airport, among other responsibilities. They will not be expected to carry out their ground handler role on top of their full-time positions, Hughes said in the note.

Executives opting into the role must also be “physically capable of moving and lifting bags of up to 32 kg (71 pounds) in weight,” Hughes said.

“We’ve been clear that our operational performance has not been meeting our customers’ expectations or the standards that we expect of ourselves — and that we’ve been pulling out all stops to improve our performance,” a Qantas spokesperson told CNN Business.
Airlines have struggled to cope with a strong bounce back in travelers after two years of pandemic restrictions and staff cuts.

Qantas (QABSY) said in June 2020 that it would slash 20% of its total workforce, or about 6,000 jobs — mostly affecting its corporate, ground and flight staff — as it tried to stay afloat during the height of the pandemic.
Hughes said in his note that the company planned to recruit thousands of new staff, including ground handlers.

Robin Hayes, the CEO of JetBlue, told the BBC on Monday that his company was over-hiring because workers were leaving their jobs at such a high rate.
Airports are having it tough, too. In July, London’s Heathrow airport, one of the busiest in the world, urged airlines to stop selling any more tickets for the summer, and said it would cap its daily departing passenger numbers at 100,000.
Source: Read Full Article