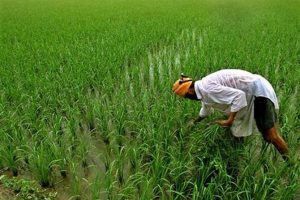 Gross value added in agriculture and allied activities clocked a healthy growth rate of 4.5 per cent at constant prices in the second quarter of FY22, up from 3 per cent during the same period last fiscal year and 3.5 per cent in Q2 of 2019-20. In the first quarter of FY22, gross value added in the sector was also 4.5 per cent.

Growth in current prices was also a healthy 7.9 per cent in July-September 2021-22, up from 7.3 per cent in the same quarter last fiscal year.

“Agriculture growth is slightly better than the long-term average of 3.5-4.0 per cent in this quarter and that is purely because of statistical reasons as very little crop output comes into the market in July-September.

He said in the full year, agriculture and allied activities were expected to clock a growth rate of 3.5-4 per cent, which is the long-term average for the sector.

In the kharif season, which just ended, the production of foodgrains, according to the first advance estimate of 2021-22 (July to June), is estimated to touch a record 150.50 million tonnes but oilseeds output is projected to be 23.39 million tonnes, which is 2.66 per cent less than last year.

The production of kharif pulses is expected at 9.45 million tonnes, which is 8.74 per cent more than last year.

In this, tur, which is among the biggest varieties of pulses grown in the kharif season, is projected at 4.43 million tonnes, which is 3.50 per cent more than last year.

However, experts said much not should be read into the initial production estimates of pulses and oilseeds because the final harvest might go down.

In 2020-21, pulses production went down by 6.65 per cent between the first and fourth advance estimates.

The sowing of rabi crops has started on a firm note and until last week around 34.13 million hectares was covered.

This is almost 7 per cent more than in the same period last year.

The maximum increase of almost 1.6 million hectares has been in the case of mustard, which has seen a good rise in market prices this year due to overall bullishness in the edible oil complex.