Home » Business » Household net worth rises above $141 trillion, but debt up sharply as well

Household net worth rises above $141 trillion, but debt up sharply as well 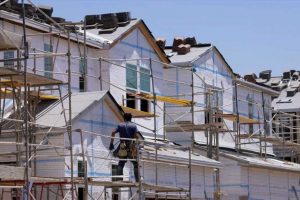 American households saw another significant jump in net worth as well as hefty increases in debt and credit, the Federal Reserve reported Thursday.

Thanks in good part to a big jump in stock market earnings, total household net worth rose to $141.7 trillion through the second quarter of 2021, the central bank's Financial Accounts of the United States report showed.

That was good for a $5.85 trillion increase, or 4.3% from the first quarter. Looking back to a year ago, when the nation was in the early days of the Covid-19 pandemic, the net worth total represents a 19.6% increase.

A large chunk of the new wealth came from stocks, which accounted for $3.5 trillion of the gain, while real estate appreciation was responsible for $1.2 trillion.

However, along with that increase came a big surge in debt.

Household debt mirrored that of the federal government, which ended the quarter owning $28.5 trillion after a 9.6% increase. That was the largest percentage gain since the second quarter of 2020 as the government launched an aggressive stimulus program to pull the economy out of the pandemic. State and local government debt increased 3.1%, a slowdown from the 3.5% pace in the first quarter.

Total nonfinancial debt outstanding across all sectors was $63.3 trillion, a quarterly increase of 6.4%, down from the 6.7% rise in the first quarter.