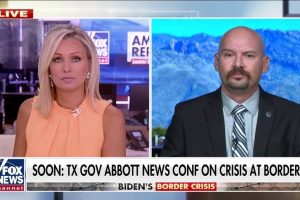 Several Republican lawmakers are standing by Border Patrol agents amid false claims from Democrats that the agents used whips on Haitian migrants attempting to cross the border illegally.

Texas GOP Rep. August Pfluger blasted the accusations from Democrats and media members. He remarked in a Tuesday email to Fox News that Department of Homeland Security (DHS) Secretary Alejandro Mayrokas “used the strongest language” the congressman has “heard from him thus far to condemn his own Border Patrol agents based on an unconfirmed photo.”

“These agents are desperately trying to carry out their duties despite being woefully understaffed and lacking the resources they urgently need,” Pfluger said. “If he is truly ‘horrified’ as he said, he should tell President Biden to stop playing political games with our nation’s security, and return to President Trump’s strong-border policies that were working.”

“Close the border once and for all,” he added.

Rep. Chip Roy, R-Texas, stood by Border Patrol amid the accusations, tweeting his agreement with border agents who blasted President Biden and Vice President Harris as “idiots” for shifting blame onto them.

The lawmakers’ comments came as a video circulated online showing what appeared to be a horseback Border Patrol agent swinging his reins near a Haitian migrant. Multiple Democrats have claimed that the agents beat migrants with whips, but there is no evidence that any migrants were struck by the agents.

National Border Patrol Council vice president Art Del Cueto pushed back on the narrative in a Tuesday interview with “America Reports,” pointing out that Border Patrol agents are not “whipping anyone” and “don’t carry whips.”

“What they do is a training technique that has been shown to them to make sure that no one takes over their horse,” Del Cueto said. “It was to protect the horse, to protect the rider and to protect the individual that was trying to cause chaos and knock down that rider from that horse.”

Del Cueto also said the agents “twirl the reins to protect everything and make sure everything’s done correctly” before blasting the Biden administration and the “narrative” coming from the media on the matter.

Houston Keene is a reporter for Fox News Digital. You can find him on Twitter at @HoustonKeene.