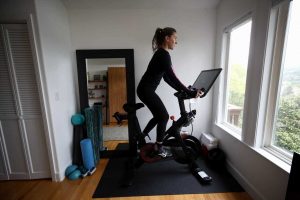 Peloton wants to be known as a health and wellness company, not a fitness business, according to its chief marketing executive.

"We definitely want to make sure that we are reflecting the communities that we serve," Peloton's Chief Marketing Office Dara Treseder told Julia Boorstin Thursday during CNBC's CMO Exchange virtual event.

"One of the things I do with my marketing team is we debate … and some people are like, 'We're a fitness company, and this is what it means to be fit.' And I have to be like, 'No, no, no. We are actually a health and wellness company, and that comes in different shapes and sizes.'"

Peloton has recently added "mood rides," which are geared to different emotions such as being happy, sad or calm. These rides as well as guided meditation classes are examples of how Peloton is trying to raise awareness around the importance of mental health, in addition to keeping in shape.

Treseder went on to say that Peloton's rampant growth during the pandemic largely stemmed from its loyal user base sharing their personal experiences with the brand to others. Peloton counts 2.33 million connected fitness subscribers — people who own a Peloton product and also pay a monthly fee for access to the company's digital workout content.

"The reality is when you try to force something, it just doesn't work," she said. "So for us, that intentional cultivation of community is really focused on finding where there are organic sparks of connection within our member base, and then kind of pouring fuel on that … shining a spotlight on those things."

Peloton has said it plans to soon ramp up spending on paid marketing, in order to advertise both its lower-priced Bike and its updated Tread machine.

But Peloton also utilizes its now-famous team of instructors to connect with users. The trainers are active across social media platforms and frequently interact with members online.

One instructor, Cody Rigsby, is competing on ABC's "Dancing with the Stars." Another, Alex Toussaint was recently signed by the athletic apparel brand Puma.

"I give so much credit to John [Foley] because that's a very hard thing to do. … The natural thing to do is to say let's control them, let's brand them," Treseder said about Peloton's CEO and how he thinks about the instructors. "The fact is, that actually doesn't work, and people can see right through that."