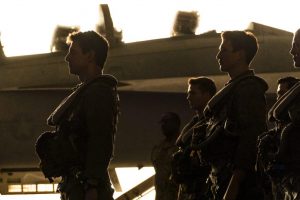 Imax saw revenue surge to $74 million in the June quarter from $51 million the year before as ticket sales jumped. The stock rebounded too, up nearly 3% in after-market trading on the news.

Profit was squeezed by a $3.2 million impairment of a film investment, the company said, due in part to Covid-related lockdowns and depressed box office levels in China. The situation there is improving with the Imax China Network 91% operational — up from 65% on April 26.

Domestic box office for the second quarter was on par with comparable pre-pandemic 2019 period. June 2022 surpassed June 2019. Domestic market share was 5.3% for the quarter, and 7% in May.

In the first half — despite a first quarter nearly devoid of said blockbuster — Imax’ domestic box office trailed 2019 by only 5% — versus s a 37% decline in the domestic exhibition industry over the same period.

Theater chains have been crowing about the latest quarter as moviegoers flocked to theaters, but Imax is the first in the exhibition business to report numbers. Blockbusters tend to over-index on supersized screens.

The superhero surge is waning, so that’s not great, although Avatar: The Way of Water — the first of four new installments of what was Imax’ highest-grossing film ever — comes out this December. The company earlier this year created a cross-divisional task force dedicated to the James Cameron film ahead of its opening.

“Imax is playing a leading role in the global resurgence in moviegoing, as demonstrated by our strong financial results, global box office growth, and market share gains we delivered in the second quarter,” said Imax CEO Richard Gelfond. He also cited recent activity to strengthen key partnerships with global exhibitors, including agreements for new theatres and installations across Asia, Europe, the Middle East, and North America

Gelfond will be discussing the numbers on a call at 4:45 ET.