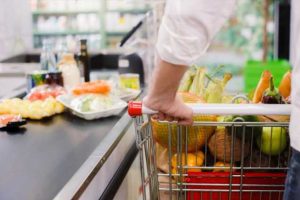 In June, California announced it would be sending $1,050 checks to approximately 23 million residents to combat the devastating effects inflation has had on state residents. Since then, a number of other states have followed suit with some form of check or tax rebate. Should even more states follow suit and release their own relief, the checks would likely still not be enough on their own for needy families. One long-standing program that millions of Americans rely on is the government’s food assistance benefits, the Supplemental Nutrition Assistance Program.

As of 2020, roughly 13.8 million U.S. households received SNAP benefits, formerly known as food stamps. To find the metro with the lowest SNAP recipiency rate in every state, 24/7 Wall St. reviewed five-year estimates of the share of households that received SNAP benefits in the 12 months prior to the survey from the U.S. Census Bureau’s 2020 American Community Survey.

As of 2020, 11.4% of U.S. households received SNAP benefits. In 46 of the 50 states, there is at least one major metro area where a lower share of households receive nutrition assistance. Among the metro areas in each state with the lowest SNAP recipiency rate, that figure ranges from 6.7% to 28.4%. There are four states with only one metropolitan area — Delaware, New Hampshire, Rhode Island, and Vermont. The single metropolitan area in each state appears on this list by default.

Because income is the primary determinant for SNAP recipiency, unemployment is strongly linked to how many people receive benefits, as those workers who are out of a job are likely to have little to no income. More than two-thirds of the metro areas with the lowest SNAP recipiency rate in their state also have a five-year unemployment rate lower than their respective state’s figure. This includes the Bismarck, North Dakota metro area, which has an unemployment rate of 2.4% the lowest of any metropolitan area in the country. These are the states with the worst spikes in unemployment since the pandemic began.

Click here to see the big city where the fewest people use food stamps in every state.