In EV News: Tesla to Pay in Advance for Chips, Federal EV Tax Credit, and More 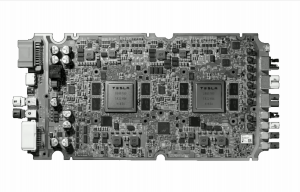 Tesla Inc. (NASDAQ: TSLA) reportedly is considering a plan to pay in advance for the computer chips it needs to manufacture its vehicles. According to a report in the Financial Times, the company is also exploring the option of buying a chipmaking plant to guarantee its supply.

In April 2019, the company revealed that its Full Self Driving (FSD) chip was being installed in the Model S and Model X vehicles. With some 6 billion transistors, CEO Elon Musk claimed the FSD chip had 21-times the performance of the Nvidia chip it replaced. Tesla designed the chip and Samsung produces it. Each FSD module contains two of the chips for redundancy in the event one fails.

Semiconductor manufacturer UMC last month said it planned to double its capital spending this year by adding capacity for an additional 20,000 wafers a month. To pay for that, the company required its largest customers to pay in advance for guaranteed delivery at a fixed price.

Tesla may decide to proceed with the plan to pay for chips in advance, but building a new fab costs in the neighborhood of $20 billion, a little rich even for the likes of Tesla.

A bill proposed by U.S. Senator Debbie Stabenow (D-MI) to support clean energy was passed out of committee on Wednesday. The Clean Energy for America Act would, among other things, extend the tax credit for buyers of new EVs until their market share reaches 50% of the total U.S. market for new cars.

The current tax credit of $7,500 disappears once an automaker sells 200,000 units. Both GM and Tesla have surpassed that mark.

Under Stabenow’s bill, the existing credit of $7,500 per vehicle could rise to $12,500 with additional credits of $2,500 each if 1) the EV is manufactured in the United States and 2) in a unionized plant. There is no manufacturer cap at all, meaning that under the new bill, both GM and Tesla buyers would once again be eligible for the tax credit. Once the 50% market share goal is reached, the credits would begin phasing out over a three-year period.

The proposed tax credit is limited to EVs with a manufacturer’s suggested retail price of $80,000 or less.

Also on Wednesday, Ford Motor Co. (NYSE: F) announced that it is increasing its spending on EVs from $22 billion to more than $30 billion by 2030 as the company aims to have EVs account for 40% of total global sales by that year. Investors rewarded the company with a share price boost of about 5.6% and another 5.8% by mid-morning Thursday.

ALSO READ: 5 High-Yielding Dividend Aristocrats May Be the Best Stocks to Own Now