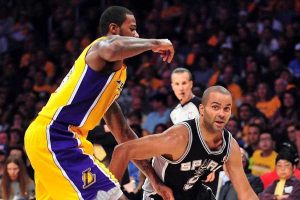 LOS ANGELES — Once he settles into the broadcast booth, Mychal Thompson senses he will feel an adrenaline rush.

Thompson will watch the Los Angeles Lakers host the Phoenix Sun in Game 3 of their first-round playoff series on Thursday at Staples Center. He will commentate on the game as the Lakers’ longtime radio analyst for their flagship station. And he will attend the Lakers' first home playoff game with fans in eight years.

“It will feel like a real game. It won’t feel like a simulated game anymore,” Thompson told USA TODAY Sports. “Without the fans, it just doesn’t seem real. It feels like the games don’t count.”

Thompson wishes that was the case when the Lakers missed the playoffs for six consecutive years, the team’s worst stretch in franchise history. Consider Thompson last called a live playoff game when the Lakers lost to the San Antonio Spurs in a four-game sweep in 2013. Then, Dwight Howard earned an ejection for what became his last game before leaving for Houston in free agency while Kobe Bryant remained sidelined with an injured left Achilles tendon.

“I thought, ‘Boy that’s tough the Lakers lost in the first round, but we’ll be back next year,” Thompson said. “Because it’s the Lakers, you always expect they’ll be back in the playoffs competing for a title.”