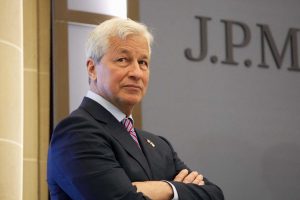 "It's got no intrinsic value. And regulators are going to regulate the h— out of it," Dimon recently told Axios CEO Jim VandeHei.

Dimon said that bitcoin will be around long-term, but "I've always believed it'll be made illegal someplace, like China made it illegal, so I think it's a little bit of fool's gold."

Dimon also said that bitcoin should be regulated by the government. "They have to," he told VandeHei. "You can't regulate everything a bank does in terms of moving money and not regulate what you would call money," like cryptocurrency.

"You can call it a security or an asset or something like that, but if people are using it for tax avoidance and sex trafficking and ransomware, it's going to be regulated, whether you like it or not," Dimon said.

Recently, the U.S. government has had a heightened focus on regulating cryptocurrency markets. In September, the Biden administration announced plans to prepare actions and sanctions against infrastructure that facilitates cryptocurrency ransomware attacks, the Wall Street Journal reported.

Gary Gensler, chairman of the Securities and Exchange Commission, has also repeatedly mentioned plans to create a set of rules for the industry.

And some financial experts argue that well-thought-out regulation would be beneficial in the U.S. "If people want crypto to become more of a mainstream asset, then I think [regulation is] a necessary first step," Anjali Jariwala, certified financial planner, certified public accountant and founder of Fit Advisors, previously told CNBC Make It.

However, cryptocurrency supporters are wary of further regulation. The crypto community worries that certain regulatory framework may stifle crypto innovation in the U.S. and push business overseas.

For his part, Dimon has held firm in his anti-crypto outlook. "I'm not a bitcoin supporter," Dimon said during The Wall Street Journal CEO Council summit in May. "I don't care about bitcoin. I have no interest in it."

But personal opinions aside, JPMorgan Chase "clients are interested, and I don't tell clients what to do," he said.

In February 2019, JPMorgan Chase said it would roll out a digital currency called JPM Coin, and in October 2020, the firm created a new unit for blockchain projects. In August, it started giving its wealth management clients access to crypto funds, CNBC reported.

Bitcoin is currently trading at around $47,576, according to CoinMarketCap, with a market value of over $896 billion.