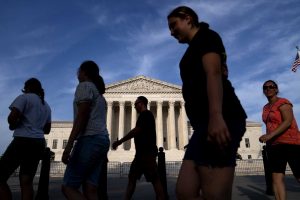 The Supreme Court on Monday resumed in-person oral arguments for the first time in 19 months, kicking off a politically fraught new term that is scheduled to include cases about abortion and gun rights.

The justices, returning to their imposing Washington courtroom after the coronavirus pandemic forced them to hold proceedings via teleconference, prodded lawyers arguing in two cases: a dispute about the ownership of groundwater that crosses the Mississippi-Tennessee border, and a criminal burglary case.

Eight of the nine justices took the bench; only Justice Brett Kavanaugh, who tested positive for Covid on Thursday, participated remotely from his home.

A number of pandemic-related tweaks to the court's proceedings were still in effect, however.

The building remained closed to the public, its status since March 2020. Only the justices, lawyers, essential personnel and journalists with full-time press credentials were allowed to sit in the courtroom.

Audio of the arguments was again livestreamed online, a historic change implemented during the pandemic. Previously, audio recordings became publicly available only at the end of each week of arguments.

The court's approach to cross-examination also more closely resembled the pre-pandemic format, in which any justice could chime in at any time to question the lawyers, who often struggled to state their cases amid a barrage of interruptions.

When cases were being heard over the phone, the justices adopted a turn-based system. Justice Clarence Thomas, who had stayed silent during in-person arguments for years at a time, began routinely asking questions during the teleconference arguments.

For the new term, the justices are using a hybrid format that allows each to take a turn asking any remaining questions at the end of each side's 30 minutes of argument.

Thomas on Monday was the first justice to ask questions in both cases.

Multiple justices appeared deeply skeptical of Mississippi's claim to the groundwater in a disputed aquifer, which the state argues is being pumped into Tennessee by the Memphis Light, Gas & Water Division.

"You've been litigating this case for over 16 years," Justice Sonia Sotomayor told John Coghlan, a lawyer for Mississippi. "When is enough enough?"

"You have a lot to explain to me, unfortunately, and I will forgive you if you don't," Justice Stephen Breyer told Coghlan later in the arguments.

While the proceedings inside the court were back to a relatively normal format, the backdrop was anything but typical.

The new term began under a cloud of criticism for the court, which last month stoked controversy after it narrowly declined to block a Texas law that bans most abortions as early as six weeks of pregnancy.

That decision was followed by new public opinion polling showing the Supreme Court at its lowest approval rating ever.

That is the setting as the court, stacked 6-3 with conservatives, gears up to consider numerous cases of major significance, including one that could overturn the landmark 1973 Roe v. Wade ruling that legalized and protected abortion rights.