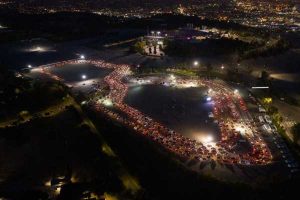 Sign up here for our daily coronavirus newsletter on what you need to know, andsubscribe to our Covid-19 podcast for the latest news and analysis.

The milestone means one in 10 people in L.A. County has tested positive at some point in the outbreak. The health department reported 14,669 new cases on Saturday, bringing the total to just over 1 million. The county also added 253 new deaths, for a total of 13,741.

The new cases are expected to put further strain on a health-care system already overwhelmed as L.A. became the nation’s epicenter of the latest wave. Across Southern California and increasingly in other parts of the state, the surge in cases following Thanksgiving and year-end holiday travel has pushed intensive-care unit capacity to zero.

County scientists this weekestimated that one in three in Greater L.A. may have been infected during the course of the pandemic. Mayor Eric Garcetti put that figure at more than 3 million people.

The county also reported its first case of the U.K. variant — a man who recently spent time in the area before traveling to Oregon, where he’s isolating. Health authorities said it expects the variant to have spread in the community.

“The presence of the U.K. variant in Los Angeles County is troubling, as our health-care system is already severely strained with more than 7,500 people currently hospitalized,” Barbara Ferrer, the county’s director of public health, said in astatement. “Our community is bearing the brunt of the winter surge, experiencing huge numbers of cases, hospitalizations and deaths, five-times what we experienced over the summer.”

In the past week, officials transformed Dodger Stadium from the biggest U.S. Covid-19 testing site into a mass vaccination center to inoculate as many as 12,000 people a day. Five more large-scale vaccination sites will be opened, including at famed concert venue the Forum, Six Flags Magic Mountain amusement park and the Pomona Fairplex, site of the county fair. The sites will each be able to accommodate about 4,000 people a day.