Home » Manufacturing could return to China, as Covid cases spike in India and Vietnam

Manufacturing could return to China, as Covid cases spike in India and Vietnam 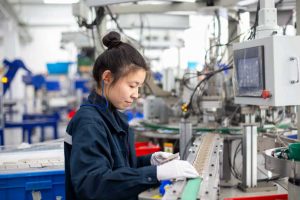 The Covid-19 resurgence in some parts of Asia could lead to a change in fortunes for China, according to an economist.

Previously, the U.S.-China trade war caused companies to move their supply chains out of China, shifting their production and distribution networks for products and services. As a result, countries like Vietnam and India benefited as companies moved to set up shop in their countries.

But the situation appears to be changing, and supply chains could pivot back to China as cases spike in India and Vietnam, according to Zhang Zhiwei, chief economist at Pinpoint Asset Management.

"Before the pandemic, we saw factories moving out of China — Samsung, Foxconn these big name companies — setting up factories in Vietnam, India," he told CNBC's "Street Signs Asia" on Monday.

The spike in cases in those two countries has forced factories owned by Taiwanese contract manufacturer Foxconn, a major Apple supplier, to shut down facilities in India and Vietnam, he said.

"This could put the relocation of supply chains on hold for quite some time. The key issue here is that international travel is suspended, so multinational companies can't send their staff to India and Vietnam to set up new factories," Zhang added.

Cases in India surged to record-breaking highs in April and shows little signs of abating significantly —economists have predicted the South Asian economy will likely contract this quarter.

In Vietnam, the northern province of Bac Giang on Tuesday ordered four industrial parks — including three that house production facilities of Taiwan's Foxconn — to temporarily shut down due to an outbreak of Covid-19.

The situation could benefit China, Zhang suggested. However, he pointed out that the extent of how much China could stand to gain will depend on how long the situation in India and Vietnam continues for.

Right now, export growth in China is between 20% to 40% a month, he said. If the factories in India and Vietnam return to production very soon, China's exports would be expected to slow down in the second half of the year as companies move their manufacturing to those two countries.

"But if supply chain (in India and Vietnam) is disrupted for a long time, we could see this kind of 20%, 30% export growth (in China) to continue into next year," Zhang said.