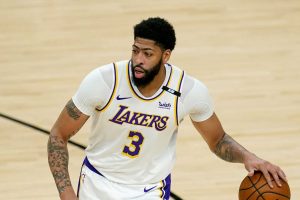 LOS ANGELES — In a move the Lakers hope will salvage their playoff fortunes, forward Anthony Davis will play in a potentially decisive Game 6 of the team’s first-round matchup against the Phoenix Suns on Thursday at Staples Center after missing the second half of Game 4 and all of Game 5 because of a strained left groin.

The Lakers will also have guard Kentavious Caldwell Pope who missed Game 4 and played only 15 minutes in Game 5 because of a sore left knee.

“It’s just a feel thing," Lakers coach Frank Vogel said. "We’ll be communicating with the medical team throughout and the coaching staff and I will be evaluating and measuring how well those guys are moving when they’re in there.”

After Wednesday’s practice, Davis reported that his groin was “getting better each day” and has been receiving “treatment around the clock” after he strained it late in the first half of Sunday’s Game 4 loss. But Davis expressed uncertainty with his availability considering the Lakers’ medical staff did not clear him to play in Game 5 following his pre-game workout.

Then, Davis said he felt “fine” after completing spot shooting drills. But he said that subsequent running drills “bothered him.” It appears that was no longer an issue after Thursday’s pre-game workout.

Did the Lakers’ medical staff evaluate Davis differently because the Lakers face a potential elimination game? Or did Davis simply make enough progress after the Lakers struggled without him in their Game 5 loss?

"He’s doing everything he can. But at the end of the day, he has to be cleared by the doctors," Vogel said beforehand. "We don’t want to do anything that’s unintelligent for his body that’s going to create something long term. He has to be cleared, but he very strongly wants to be in there.”