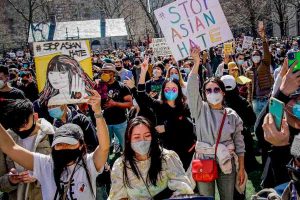 A man who allegedly threw rocks at an Asian woman and her 6-year-old son in the Los Angeles area was charged with a hate crime Monday, the latest in a string of attacks targeting Asian Americans.

Roger Janke, 28, faces several charges, including violating civil rights, throwing a substance at a vehicle and a hate crime, according to the Orange County District Attorney’s office.

Janke is accused of throwing two rocks at the woman and her son while they were driving in Fullerton, about 25 miles southeast of Los Angeles. The rocks cracked the windshield of the woman’s Tesla and damaged her bumper, the DA’s office said in a press release.

The woman drove to a nearby park and called authorities.

“I refuse to tolerate hate in Orange County,” District Attorney Todd Spitzer said in a statement. “A woman and her child should be able to drive down the street without worrying about being attacked because of the color of their skin.”

Spitzer vowed to prosecute the case and others like it to the fullest extent to send a message: “There is no room for hate here – or anywhere.”

Janke, who told police that “Koreans in the area were trying to control him,” according to the release, pleaded not guilty. The Fullerton man faces a maximum sentence of six years in prison.

The incident is the latest in a disturbing surge of hate crimes targeting Asian Americans since the beginning of the COVID-19 pandemic. Nearly 3,800 incidents were reported to Stop AAPI Hate, a San Francisco-based organization that tracks discrimination and xenophobia against Asian Americans and Pacific Islanders. The group said those reported incidents are “only a fraction” of the number that actually occur.

This Sunday March 21, 2021 file photo shows people at a rally against hate and violence against Asians living in the United States in Columbus Park in the Chinatown section of Manhattan, N.Y. (Photo: Eduardo Munoz Alvarez, AP)

The incidents have rattled the AAPI community, with some considering leaving areas like San Francisco where there have been a number of unprovoked attacks. The concerns hit a peak last month after eight people were shot and killed at three spas in Georgia. Six of the victims were women of Asian descent, though authorities have not said the shooting was motivated by race.

‘This affects all of us’: Marches, rallies against Asian hate crimes see widespread participation

In the aftermath of the attack, demonstrators took to the streets in major cities nationwide, including New York, Washington, Chicago and San Francisco, to protest the wave of violence.

The attacks against Asian Americans haven’t just been physical.

A survey shared with USA TODAY last month showed Asian Americans reported the single biggest increase in serious incidents of online hate and harassment over the past year. Some 17% of Asian Americans reported sexual harassment, stalking, physical threats and other incidents, up from 11% last year, according to the survey by the anti-hate group ADL.