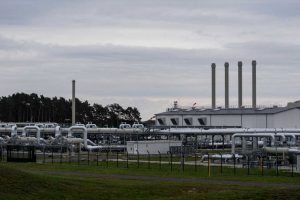 Nord Stream 2 stretches for 1,200 kilometres from Vyborg in Russia through the Baltic Sea to Lubmin in Germany, bypassing Ukraine and Poland.

The gas pipeline is finished, but it is waiting regulatory approval before it can start providing the 55 billion cubic meters of natural gas to Europe every year.

It is only a matter of time, according to Gustav Gressel, senior policy fellow at the European Council on Foreign Relations, a think tank, before the German energy regulators give their seal of approval.

The task is not that easy amid heightened geopolitical tensions.

Some European lawmakers are fiercely opposed to the deal and do not want regulators to approve it.

"We want to break out from this [Russian energy] dependence," Morten Petersen, a Danish lawmaker at the European Parliament, told CNBC's "Street Signs Europe" on Friday.

Nord Stream 2 brings up different geopolitical aspects. On the one hand, the U.S. has always opposed the pipeline, saying it increases Europe's dependency on Russia. President Joe Biden's administration has been criticized by lawmakers from both parties, however, for not doing enough to halt the project.

The majority of natural gas going into Europe already comes from Russia. In 2020, this represented about 43% of the total gas imports to the bloc, according to Eurostat.

Poland and Ukraine are opposed to the pipeline, citing energy security concerns. For Kyiv, it is feared the pipeline could lead to fewer natural gas flows via Ukrainian pipes and hence fewer revenues to its ailing economy. Critics also argue the pipeline is not compatible with European climate goals and will most likely strengthen Russian President Vladimir Putin's economic and political influence over the region.

Advocates of Nord Stream 2 claim U.S. opposition stems from its wish to sell more of its liquified natural gas to Europe and therefore sees the deal with Russia as an obstacle to its commercial interests.

For Putin, and many lawmakers in Germany, Nord Stream 2 is nothing more than a business deal.

Speaking to CNBC's Hadley Gamble on Wednesday, the Russian president said the project was "purely commercial" and an efficient way to provide natural gas to Europe.

Nord Stream 2 represents a shorter route to Europe than Ukrainian pipelines and given its more modern, it is also cheaper to maintain.

A paper from the European Parliament said that "estimates of how much refurbishment [of Ukrainian pipelines] would cost vary from $2.5 billion to $12 billion, while the bill for total replacement, according to a 2017 KPMG study, could be as high as $17.8 billion." Overall costs for Nord Stream 2 are estimated at about 9.5 billion euros ($11 billion), according to the same paper.

The debate over what to do with Nord Stream 2 has gained even more attention in recent weeks as energy prices soar across Europe. Higher gas and electricity prices put pressure on households and could ultimately derail the economic recovery that has taken shape in recent months.

As a result, European leaders are under pressure to take measures to mitigate the impact.

Putin has said that his country can deliver more gas to the bloc, provided they request it. He denied the Kremlin is using energy as a weapon against Europe amid reports Russia has withheld gas supplies to the region.

But the EU is unsure about what to do. Increasing gas imports from Russia could provide some short-term relief but there are tough questions about what to do in the medium and long term.

There are efforts across the EU to reach carbon neutrality in the coming years and this raises the question about what sort of energy mix European countries are after.

While some see natural gas, a fossil fuel, as a means to reduce CO2 emissions in the path to carbon neutrality, others argue that energy independency is the most important aspect – hence nuclear and renewables are purported to be the option.