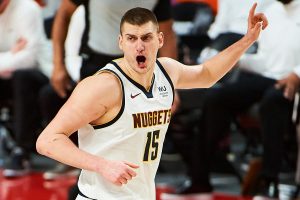 Overcoming a 3-1 series deficit twice in one postseason builds resilience in a team. The Denver Nuggets showed off theirs Thursday to win a closeout game on the road against an all-time great playoff performer .

Nikola Jokic and the Nuggets finished off Damian Lillard and the Trail Blazers with a 126-115 Game 6 victory in Portland to advance to the second round. Jokic scored 27 of his game-high 36 points in the second half as Denver rallied from as many as 14 down. Michael Porter Jr. had 26 points, and Monte Morris added 22 off the bench.

"Nobody can take the fight out of us," Jokic said. "We will just go out there and fight and that's what we have been doing. We're never going to quit. Quit is not in our vocabulary."

Following tonight’s game 6 victory, Coach Michael Malone addressed the media and discussed how his team was able to limit @Dame_Lillard down the stretch. #MileHighBasketballpic.twitter.com/66p9dA86L2

Coming off an historic 55-point outing in Game 5, Lillard led Portland again Thursday with 28 points and 13 assists. He couldn't find the same zone, though, and shot 8-of-20 from the field, including 3-of-11 from 3-point range. Lillard appeared gassed in the fourth quarter when he was limited to just five points on 1-of-6 shooting.

"We didn't do what was necessary to win the series," Lillard said. "We've got to keep fighting, keep working and keep coming back to battle. Regardless of how it ended, we are always going to have our heads held high, have class. They won, congratulations to them, but it's back to the drawing board to us."

The Blazers led 68-61 at halftime and pushed the lead to as many as 14 points multiple times in the third quarter. They took a 91-77 lead on a C.J. McCollum bucket with 5:42 left, but the Nuggets rallied to within 101-98 by the end of the quarter.

Denver then took control in the fourth and outscored Portland 28-14 to pull away.

"I think we've shown as a group that every time we hit adversity, most times, we never run from it," said Nuggets coach Michael Malone. "We buckle down, we embrace it, we find a way."

The Nuggets will face the Phoenix Suns in the second round beginning Monday. The Suns also advanced Thursday after closing out the defending champion Los Angeles Lakers in Game 6.

State of the series: Nuggets win 4-2.