Home » Business » OPINION: Lakers’ Anthony Davis on injury tag: ‘I don’t have to prove nothing to anyone’

OPINION: Lakers’ Anthony Davis on injury tag: ‘I don’t have to prove nothing to anyone’ 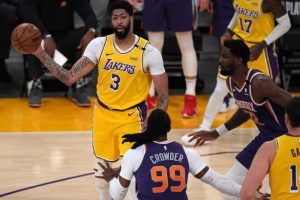 The Los Angeles Lakers' star received clearance to play in Game 6 of the team's first-round playoff series against the Phoenix Suns in hopes to prevent or at least delay postseason elimination. But after missing the second half of Game 4 and all of Game 5 because of a strained left groin, Davis still struggled to defend, attack the rim or even move at all.

So well before the Lakers officially failed to defend their NBA title with a 113-100 loss to the Suns on Thursday at Staples Center, Davis sat on the floor adjacent to the Lakers’ bench with only 6:35 left in the first quarter. He hurt so much that he didn’t even have the strength to sit on the bench.

“It never really felt good, but it was my competitive nature to want to go out and help the team as much as I could,” Davis said. “My body didn't agree.”

Not only did that add frustration to Davis’ failed efforts both to win his second consecutive NBA title and overcome his latest ailment. It sparked criticism about his extensive injury history.