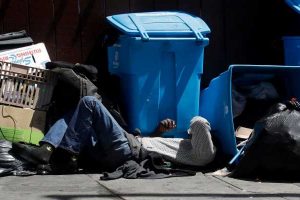 In San Francisco in 2020, the number of opioid overdose deaths, 697, was more than twice as high as the city’s COVID-19 deaths, 257. Yet California lawmakers, so quick to lock down the economy, issue stay-at-home orders and mandate masks, are taking a very different approach to the opioid epidemic – giving people with drug addictions a so-called safe place to inject their drugs.

Advocates say the Golden State’s efforts to reduce the harms of drug abuse will set a model for other states to emulate. Based on our collective experience – one of us was addicted to drugs and lived on San Francisco’s streets, the other has worked with homeless women and children for more than a decade – we believe that this proposal will not lessen the substance abuse epidemic that California cities face, nor will it help homeless individuals.

The National Institute on Drug Abuse describes addiction as chronic, complex brain disorder. It is a disease, and we have seen firsthand that we must treat it like one, just as we treat COVID-19. Addiction should not be treated as a lifestyle.

Yet the California Senate passed legislation in April permitting three jurisdictions – the city and county of San Francisco, the county of Los Angeles and the city of Oakland – to create safe injection sites until 2027. The bill creates a set of standards that sites would have to meet, including the presence of trained medical staff, sterile supplies and access to naloxone and related overdose reversal medications.

Then-Gov. Jerry Brown vetoed similar legislation in 2018, but his successor, Gavin Newsom, has described himself as “very, very open” to the idea, suggesting it could get enacted into law this year.

The bill’s flaws start with its title, which christens the injection sites as part of an “overdose prevention program.”

But equally troubling is the question of who will come? When I, Thomas, was struggling with homelessness and a heroin addiction in my hometown of San Francisco as recently as 2018, I know I wouldn’t have. Why? Because there are no consequences for using on the street, out in the open, even in front of a cop. Once, I blew smoke from my crack pipe into the face of a police officer standing near me on Hyde Street. He didn’t even arrest me; he simply made me step on my pipe.

What’s more, I would have been forced to leave my belongings unattended while attending the safe injection site. That’s unthinkable to anyone living on the streets.

The other of us, Michele, has spent 13 years on the front lines with homeless women and children. Drug addiction plagued the majority of families I worked with. Full access to a safe injection site is an invitation to ignore the issue that nudged our clients to homelessness in the first place. Without exception, the thousands of women we served during my tenure will tell you that they needed support in overcoming their addiction, not support in feeding it.

A homeless man sleeps in front of recycling bins and garbage on a street corner in San Francisco. (Photo: Jeff Chiu/AP)

Who would be served by safe injection sites? The street drug dealers who want easy access to the highly motivated customer base will benefit immensely through this legislation. Dealers congregate near the safe injection site in Vancouver, the controversial program after which San Francisco’s is modeled.

Taking a “harm reduction” approach to drugs is already failing in California. One of Los Angeles’ major harm reduction centers saw fewer than 1% of its program participants voluntarily enter into a free drug rehabilitation program in 2019, indicating the safe injection sites would help little when it comes to converting drug users into rehabilitated ones.

Michele Steeb in Sacramento, California, in May 2018. (Photo: Family handout)

Furthermore, we find it appalling that the legislation is targeting three cities that are grappling with increases in some violent crime and homelessness, inflaming an already tense situation confronting residents and business owners. Already, nearly 5,000 homeless people live in the half square mile of Los Angeles’ Skid Row, which is also the epicenter of the city’s addiction crisis.

Opioid crisis: If your teenager was addicted to opioids, would you know? It’s harder than you think.

California’s elected officials cite ending homelessness as a major policy goal, but they are trying to solve a problem by ignoring its underlying causes. In fact, a 2008 survey by the U.S. Conference of Mayors found that substance abuse was the largest cause of homelessness for single adults in the 25 cities polled.

According to the Substance Abuse and Mental Health Services Administration, nearly 65% of homeless people had drug use problems in the past month, yet California’s approach suggests that providing a house or shelter alone will “solve” an addicted homeless person’s problem, turning a blind eye to the underlying causes of their homelessness.

In April, a Los Angeles county supervisor nominated one prominent Californian, celebrity physician David Drew Pinsky, to a homelessness commission. But backlash scuttled his nomination due to Pinsky’s belief that mental health and addiction must be addressed to successfully battle the homeless epidemic.

By definition, a disease requires treatment. Safe injection sites don’t offer real treatment. They don’t offer the comprehensive healing, the tools or the hope for a better life – the remedy those struggling with addiction desperately need. And this policy will only leave our homeless even more ignored.

Michele Steeb is the co-author of “Answers Behind the RED DOOR: Battling the Homeless Epidemic.” For 13 years, she served as executive director of Saint John’s Program for Real Change, a Sacramento-based program supporting women and children. She is a senior fellow with the Texas Public Policy Foundation and oversees the its initiative to transform America’s and Texas’ homelessness policy.

Thomas Wolf is a recovering heroin addict who lived on the streets of San Francisco as recently as 2018. He is now an advocate for recovery, drug treatment and commonsense drug policy reform.