Home » Business » SAG-AFTRA Leaders On New Voting Law In Georgia: “We Oppose Any Effort To Suppress The Constitutional Rights Of Americans”

SAG-AFTRA Leaders On New Voting Law In Georgia: “We Oppose Any Effort To Suppress The Constitutional Rights Of Americans” 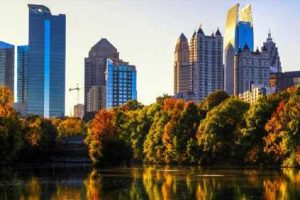 Addressing the new voting law in Georgia, SAG-AFTRA said today, “We oppose any effort to suppress the constitutional rights of Americans, including our members.”

The new law, pushed through Georgia’s Republican-dominated Legislature and signed by Gov. Brian Kemp, includes provisions for strict new voter-ID requirements for absentee voters, prohibits election officials from mailing absentee ballot applications to all voters, sharply limits the number of ballot drop boxes and makes it illegal to offer food or water to voters waiting in line to vote. Supporters of the law say it’s designed to prevent voter fraud. Opponents call it voter suppression. President Joe Biden has called it “an atrocity” and “Jim Crow in the 21st century.”

“It is clear that there is plenty of work to do to make our communities more fair, equitable, and safe,” said SAG-AFTRA president Gabrielle Carteris and national executive director David White. “This includes protecting the sacred right to vote. The more voices and perspectives we see at the ballot box, the stronger our democracy and our people will be. We encourage SAG-AFTRA members everywhere to make themselves heard, stand up against injustices, and support laws designed to level the playing field.”

Major League Baseball has pulled this year’s All-Star Game from Atlanta because of the law, and on Friday the WGA came out in opposition to the law, suggesting that the state’s film and television industry might suffer if it’s allowed to stand.

“The WGA and its members do not decide whether film and TV projects are produced in Georgia,” WGA West president David Goodman and WGA East president Beau Willimon said in a message to their members. “But we do have members who live and work in the state – many of whom are BIPOC (Black, Indigenous and people of color), and who are deeply troubled by the new law and the damage it does to them and to their state. Together we stand in opposition to all efforts to suppress the vote, including this regressive new law. If Georgia wants to benefit from the thousands of good jobs our industry brings to the state, it cannot attack the democratic rights of its own people.”