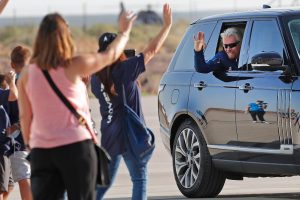 New York (CNN)Richard Branson became the first billionaire to reach suborbital flight in his own rocket-powered plane Sunday, setting the stage for how the media will cover wealthy individuals looking to build a business in space travel.

Branson’s flight is a landmark moment for the commercial space industry and journalism. “This is a publicity stunt but it’s also inspiring,” CNN’s space and defense correspondent Kristin Fisher told CNN’s chief media correspondent Brian Stelter on “Reliable Sources” Sunday. “You can have both of those things happening at the same time.”
Branson has been competing in a space race of sorts with Amazon founder and former CEO Jeff Bezos, who is expected to head to space in a rocket ship made by his space company, Blue Origin, on July 20.

Media outlets across the country covered the Virgin Galactic launch Sunday. The billionaire space race opens up an opportunity for newsrooms to aggressively and cohesively focus on the intersection of outer space and billionaires.

The billionaire beat “isn’t a luxury beat about the rich and famous doing crazy stuff,” Teddy Schleifer, founding partner of Puck News, said. “These are private citizens who have enormous power, enormous wealth and are able to use it in really fascinating ways.” He added that it’s impossible to talk about the success of these billionaires “without talking about the system that creates it in the first place.”

“The same forces that create the winners of capitalism also create a lot of inequality,” Schleifer said. Journalists need to cover how billionaires take their winnings from capitalism and use them to try to combat inequality “and do amazing things for humanity,” he said. “That’s the tension that I think newsrooms need to dive into more.”
Source: Read Full Article