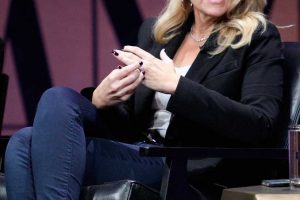 SpaceX president Gwynne Shotwell does not think the company will add "tiered pricing" for its direct-to-consumer Starlink satellite internet service, which is currently offered at $99 a month in limited early access.

"I don't think we're going to do tiered pricing to consumers. We're going to try to keep it as simple as possible and transparent as possible, so right now there are no plans to tier for consumers," Shotwell said, speaking at the Satellite 2021 "LEO Digital Forum" on a virtual panel on Tuesday.

In a tiered pricing system, what the customer pays is based on the level of service he or she chooses.

Starlink is the company's capital-intensive project to build an interconnected internet network with thousands of satellites, known in the space industry as a constellation, designed to deliver high-speed internet to consumers anywhere on the planet.

The company has launched more than 1,200 satellites to orbit so far.

In October, SpaceX began rolling out early Starlink service in a public beta that now extends to customers in the U.S., Canada, the U.K., Germany and New Zealand – with service priced at $99 a month in the U.S., in addition to an upfront cost for the equipment needed to connect to the satellites.

Elon Musk's company has continued to expand Starlink's service, with the public beta gaining more than 10,000 users in its first three months. Shotwell noted that SpaceX does not "have a timeframe for getting out of the beta phase," saying that the company still has "a lot of work to do to make the network reliable."

Musk's company plans to expand Starlink beyond homes, asking the FCC to widen its connectivity authorization to "moving vehicles," so the service could be used with everything from aircraft to ships to large trucks.

For now SpaceX is focused on serving customers in rural and hard-to-reach areas, with Shotwell saying that Starlink "will be able to serve every rural household in the United States," or "roughly 60 million people." While SpaceX is adding service to other countries, Shotwell said SpaceX is focused initially on the U.S. "because they speak English and they're close and, if they have a problem with their dish, we can get one shipped out quickly."

"But we definitely want to expand this capability beyond the U.S. and Canada," Shotwell added.

One major obstacle for Starlink, as well as any satellite-based broadband service, is the cost of the user terminals: The equipment on the ground that connects customers to the network.

Shotwell said SpaceX has "made great progress on reducing the cost" of the Starlink user terminal, which originally were about $3,000 each. She said the terminals now cost less than $1,500 and SpaceX "just rolled out a new version that saved about $200 off the cost."

That means SpaceX is absorbing about two-thirds of the cost of the terminals, as the company is charging beta customers $499 upfront for a user terminal. Musk said earlier this year that Starlink "needs to pass through a deep chasm of negative cash flow," a significant portion of which is expected to be due to the cost of the user terminals.

While SpaceX is not charging customers for the full cost of the terminals so far, Shotwell said the company does expects its cost to come down to "the few hundred dollar range within the next year or two."

Shotwell again emphasized previous comments by SpaceX leadership that Starlink is not looking to replace the service of "giant providers AT&T, Comcast, etc.," as she noted its satellite internet is "very complimentary to the services that they provide."

In the meantime, Shotwell said SpaceX's challenge is learning how to scale for consumer customers while "making sure we can build a reliable network." But, she added, none of these are challenges "which we can't solve."