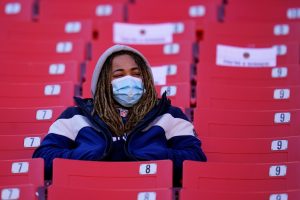 The sports world is experiencing vivid Covid flashbacks, with the spread of the Omicron variant prompting new restrictions and waves of rescheduled or canceled games reminiscent of 2020.

The NFL has been talking with the players union about reshuffling a few games, including Sunday’s late-afternoon matchup between the Seattle Seahawks and Los Angeles Rams and at least two others. The Rams had placed 25 players on the Covid list. The league earlier in the week announced stepped-up safety protocols, including a requirement for all players and personnel to wear masks at team facilities.

The Washington Football Team’s game with the Philadelphia Eagles on Sunday could move to Tuesday. The Las Vegas Raiders-Cleveland Browns contest on Saturday could move to Monday night, creating an unusual late-season doubleheader in primetime.

TV network schedulers will not have to scramble to replace top-tier sports with cornhole and Korean baseball, as they did in the early days of the pandemic. But they could face some brain-bending, last-minute holes to patch as the infection trends play out. One marquee matchup, NBC’s Sunday Night Football game between the New Orleans Saints and Tampa Bay Buccaneers, was still on as of this afternoon. But Saints head coach Sean Payton is out due to Covid, however, yet one more ominous sign.

The NBA just announced tighter safety restrictions, including more widespread mask requirements. Some teams have barely been able to field a starting five due to pandemic issues. More than 50 players, coaches and members of team staffs have been placed on the Covid list since Thanksgiving, including standouts like Giannis Antetonkoumpo, James Harden and Russell Westbrook. (The increase did follow an increase in testing.) With a league-high eight players in Covid protocols, the Chicago Bulls had to postpone two games.

The National Hockey League also has been hit hard this week, with dozens of players entering Covid protocol and several games postponed. Today, the league said its Colorado Avalanche and Florida Panthers have shut down until after the NHL’s planned Christmas break, which ends Monday. The Panthers had seven players enter Covid protocol just before Thursday night’s game with the Los Angeles Kings. Elsewhere, Saturday’s Boston Bruins game against the host Montreal Canadiens has been postponed, and the Calgary Flames’ home games next week against the Anaheim Ducks and expansion Seattle Kraken have been scrapped as 19 Flames players, three coaches and nine support staffers entered Covid protocol.

The NHL has postponed 20 games total so far this season due to Covid. The league pushed 55 games last season, but all were made up as part of a truncated 56-game schedule.

Concerns about the variant’s spread prompted the Canadian government to restrict arenas to 50% capacity, affecting games by the NBA’s Toronto Raptors as well as several hockey teams. The NHL’s Flames were considering playing in an empty arena, but decided to reschedule games instead. NHL players have also been expressing doubt about February’s Beijing Olympics, given China’s strict “Covid-zero” policy. Any player testing positive would need to stay in isolation beyond the two-week window of the Games and the NHL has said they would forfeit their pay for any missed games.

College basketball has hit a bumpy stretch, and is more strict about counting postponed games as forfeits if they can’t be made up in short order. A game slated for Saturday at New York’s Madison Square Garden between Iona and Seton Hall, a top-20 team after knocking off two top-rated teams this year, was canceled. A Saturday matchup between UCLA and North Carolina was also canceled because of Covid developments within the Bruins program. UCLA’s team-related activities have been paused and the status of future games is to be determined, the school’s athletic department said in a release Friday.

The pause for sports comes as the larger situation for colleges has become fraught, with schools like Princeton, Cornell and New York University all switching to remote instruction and clearing out campus buildings.

Erik Pedersen and City News Service contributed to this report.

‘MJ’ Shuts Down Until After Christmas; ‘Hamilton’ & ‘Moulin Rouge’ Are Dark Tonight