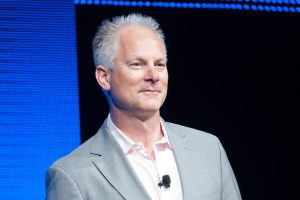 Mayne revealed the split in a social media post Monday afternoon, characterizing himself as a "salary cap casualty."

Known for his dry sense of humor, Mayne joined ESPN in 1994. He was a fixture on ESPN2's motorsports and horse racing coverage before moving on to contribute features for "Sunday NFL Countdown" and anchor "SportsCenter."

He occasionally branched out beyond ESPN's umbrella to star in television commercials and in 2006, to compete in ABC-TV's "Dancing With the Stars."

From 2008 to 2011, he produced and starred in an original scripted series on ESPN.com, "Mayne Street," in which he played himself in a fictionalized version of life on sports television.

I am leaving ESPN.
Salary cap casualty.
Thanks for the opportunity Vince Doria & Al Jaffe & for taking my solicitations
Herman/Stinton/Lynch.

A native of Kent, Washington, Mayne played football for two seasons at the University of Nevada-Las Vegas. His ESPN bio page (which was still live as of Monday afternoon) also notes that he signed as a free agent with the Seattle Seahawks in 1982.