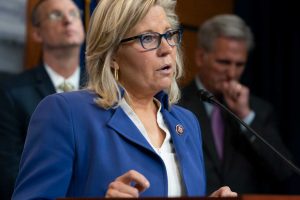 This comes as the Wyoming lawmaker continues to draw attacks from her fellow Republicans over her criticism of former President Donald Trump, who she’s repeatedly slammed for promoting ‘the big lie’ of widespread election fraud in the 2020 election.

In a letter to Republican House members Monday, McCarthy wrote the party’s “driving focus would be taking back the House in 2022” and “internal conflicts need to be resolved so as to not detract from the efforts of our collective team.”

“Having heard from so many of you in recent days, it’s clear that we need to make a change. As such, you should anticipate a vote on recalling the Conference Chair this Wednesday,” he continued.

GOP lawmakers will meet behind closed doors Wednesday morning on Capitol Hill where Cheney’s fate could be sealed as a growing number of her colleagues are looking to boot her as conference chair, the third most powerful GOP post.

“House Republicans need to be solely focused on taking back the House in 2022 and fighting against Speaker (Nancy) Pelosi and President (Joe) Biden’s radical socialist agenda, and Elise Stefanik is strongly committed to doing that,” Scalise spokesperson Lauren Fine said in a statement emailed to USA TODAY last week.

What it means: Rep. Liz Cheney could lose GOP leadership role over her criticism of Trump. What does that mean?

Cheney angered many of her GOP colleagues in January when she not only voted to impeach Trump on a charge he incited the Jan. 6 storming of the Capitol but also publicly called the former president out for his unfounded claims the 2020 election was fraudulent.

In February, Cheney retained her post in the party during a tumultuous, hours-long, closed-door meeting. Her fellow Republicans voted 145-61 (with one abstention) by secret ballot to keep her as chair.

After the meeting, Cheney told reporters the vote made clear “that we’re not divided and that we’re not going to be in a situation where people can pick off any member of leadership. It was a very resounding acknowledgment that we need to go forward together, and we need to go forward in a way that helps us push back the really dangerous and negative Democratic policies.”

But Trump’s continuing narrative that the election was stolen prompted Cheney to keep pushing back at him.

“The 2020 presidential election was not stolen. Anyone who claims it was is spreading THE BIG LIE, turning their back on the rule of law, and poisoning our democratic system,” the GOP caucus chair tweeted.

Her tweet came as Trump issued a tweet-like statement calling the results of the presidential election “THE BIG LIE,” flipping on its head a phrase used during his second House-led impeachment to describe his false claims of voter fraud.

“This is about whether the Republican Party is going to perpetuate lies about the 2020 election and attempt to whitewash what happened on Jan 6. Liz will not do that. That is the issue,” Jeremy Adler, a spokesperson for Cheney, said in a statement last week.

Her response has continued to frustrate party leaders, including McCarthy who defended the congresswoman back in February, but now says the conference is losing confidence in her.

“I have heard from members concerned about her ability to carry out the job as conference chair, to carry out the message,” he told Fox News May 4. “We all need to be working as one if we’re able to win the majority.”

On a hot mic, McCarthy told Fox News anchor Steve Doocy off-air: “I’ve had it with… I’ve had it with her. You know, I’ve lost confidence… Well, someone just has to bring a motion, but I assume that will probably take place.” The comment was first reported by Axios and confirmed by CNN.

More: Rep. Liz Cheney writes in op-ed that GOP is at a ‘turning point,’ calls out McCarthy comments on Trump

In a recent Washington Post op-ed,Cheney called out McCarthy for changing his stance on Trump, saying he “left no doubt” about Trump’s guilt in his public remarks days after Jan. 6.

“On the floor of the House on Jan. 13, McCarthy said: ‘The president bears responsibility for Wednesday’s attack on Congress by mob rioters. He should have immediately denounced the mob when he saw what was unfolding.’ Now, McCarthy has changed his story,” she wrote.

“The Republican Party is at a turning point, and Republicans must decide whether we are going to choose truth and fidelity to the Constitution,” wrote Cheney. “In the immediate wake of the violence of Jan. 6, almost all of us knew the gravity and the cause of what had just happened – we had witnessed it firsthand.”

The possible ouster of Cheney, the daughter of former Vice President Dick Cheney, represents continued tension in the GOP between two distinct camps: those loyal to Trump and his voter fraud claims and more mainstream Republicans.

In her op-ed, Cheney did not mince her words about the current situation and the “cult of personality” of Trump.

Some Republicans, including Utah Sen. Mitt Romney, who reject the former president, have defended Cheney.

“Every person of conscience draws a line beyond which they will not go: Liz Cheney refuses to lie,” Romney tweeted May 4.

He tweeted Monday after McCarthy’s letter that “Expelling Liz Cheney from leadership won’t gain the GOP one additional voter, but it will cost us quite a few.”

Expelling Liz Cheney from leadership won’t gain the GOP one additional voter, but it will cost us quite a few.

On Sunday, Republicans continued to firm up their positions in the debate over whether to replace Cheney.

“Any leader who is not focused on pushing back against the radical and dangerous Biden agenda needs to be replaced,” Rep. Jim Banks, R-Ind., told “Fox News Sunday” when asked about his reasoning for opposing her leadership. Banks is chairman of the Republican Study Committee, the largest GOP caucus in Congress.

Rep. Adam Kinzinger, R-Ill., one of the few House Republicans to vote for Trump’s second impeachment, expressed support for Cheney on Sunday.

“It’s incredible. Liz Cheney is saying exactly what Kevin McCarthy said the day of the insurrection. She’s just consistently been saying it. And a few weeks later, Kevin McCarthy changed to attacking other people,” Kinzinger said on CBS News’ “Face the Nation.”

“And so, I think the reality is that we as a party need to have an internal look and a full accounting as to what led to Jan.6. I mean, right now it’s basically like we’re the Titanic. We’re in the middle of this slow sink, there’s a band on deck telling everyone it’s fine, meanwhile, Donald Trump is looking for women’s clothing trying to get on the first lifeboat,” he said.