Home » Business » States With the Most Structurally Deficient Bridges

States With the Most Structurally Deficient Bridges 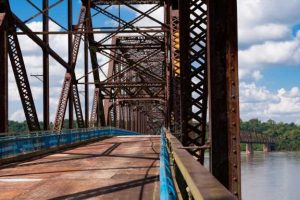 The proposed legislation, which is scheduled for a vote in the House on Sept. 27, would “fix the ten most economically significant bridges in the country in need of reconstruction” and another 10,000 smaller bridges in the worst condition. Even as Congress debates the plan, members from both sides of the aisle agree the nation’s hard infrastructure desperately needs a long-overdue upgrade.

Under federal law, states must periodically inspect bridges — based on standards set by the Pavement and Bridge Condition Performance Measures final rule — and report the findings to the Federal Highway Administration. The deck, superstructure, substructure, and culvert are all rated on a scale of 0 to 9. If all the elements rate at least 7, the bridge is classified as being in good condition. If an element rates no less than between 5 and 6, the bridge is considered in fair condition. If any of the bridge’s elements rate 4 or less, the bridge’s condition is classified as poor.

To determine the states with the most bridges in poor condition, 24/7 Wall St. reviewed data from the FHWA. States were ranked on the share of total bridges classified as being in poor condition as of Dec. 31, 2020.

Bridges are also considered structurally deficient “if significant load-carrying elements are in poor condition due to deterioration or damage” or if “the waterway opening of the bridge causes intolerable roadway traffic interruptions.” However, a bridge classified as structurally deficient isn’t necessarily unsafe and may require some measures taken or more frequent monitoring. If a bridge is found unsafe, it would be shut to traffic immediately.

The statistics from FHWA are national. As with so much of the nation’s infrastructure, Conditions of bridges vary by state, with some in better shape than in others. The safest state for bridge hopping is Nevada. There, a mere 1.4% of its bridges have lapsed into poor condition. At the other end of the spectrum is West Virginia, where 21.1% of bridges are considered as being in poor conditions. For more on how states rank on infrastructure, see states that are falling apart.

Interestingly, Iowa has the second largest percentage of bridges in poor conditions. Yet that same state was the inspiration for the romantic book and movie “The Bridges of Madison County.” Apparently, 19.1% of those bridges might be in poor condition. (See how “Bridges” ranks among the 29 biggest Meryl Streep movies, ranked worst to best.)