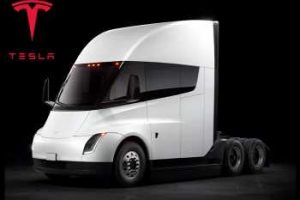 Tesla Inc. has delivered its first Semi, a heavy-duty electric truck, to its customer PepsiCo Inc. during an event at its Nevada Gigafactory.

The delivery of 500-mile fully electric Semi truck comes five years after the launch of the truck’s prototype in 2017.

The event showcased at least 5 Tesla Semi electric trucks, of which 3 were white trucks, one with Pepsi and one with its snack foods unit Frito-Lays branding.

Tesla’s all-electric class 8 truck, Tesla Semi, was unveiled in 2017, with a plan to start production as soon as 2019. However, the plans got delayed for years due to various reasons. In 2020, Musk had said that Tesla’s own battery cells, which were under development, would not reach high-volume production until 2022, and would eventually affect the Cybertruck, Semi, and Roadster programs.

In April this year, the company said it plans to release the Tesla Semi EV in 2023, along with its long-awaited electric pickup Cybertruck.

In early October, Musk announced that the luxury electric vehicle maker has started the production of Tesla Semi electric trucks, and the first delivery will be to food and beverages giant Pepsico starting December 1.

On November 26, Musk tweeted that Tesla had completed a 500-mile drive with the Semi weighing in at 81,000 pounds.

Soon after the Semi launch in 2017, PepsiCo, the first customer to receive and use Semi trucks, had placed orders for 100 Tesla Semi electric trucks to add to its fleet. The company was expecting to take deliveries of 15 Tesla Semi trucks initially, for a project to turn its Frito-Lay Modesto, California, site into a zero-emission facility.

Last year, Tesla had installed a Megacharger station for the trucks at Pepsi’s Modesto facility.

According to Tesla, the truck can drive 500 miles on a single charge, fully loaded. The semi truck’s features include driver’s seat in the center of the cab rather than on one side, as it helps to accelerate much more quickly than traditional semi trucks. It has three electric motors, and also a new, fast-charging system.

At the event, Musk said a new megawatt ultra-fast chargers will be used to quickly refill the truck’s batteries, which will also be made available for Cybertrucks when the pickup truck goes on sale.

CNBC earlier had reported that the truck was expected to cost $180,000, and that it would qualify for a tax break of up to $40,000 under a U.S. subsidy program.

Even though Semi was the first fully electric heavy-duty truck to be announced, similar trucks were launched into the market during its development period, including electric trucks by Volvo-owned Renault Trucks, Daimler as well as Nikola.