Home » Business » The mega $48 billion Warner Discovery debt deal is being woven together by 22 banks. Here's the breakdown of one of the largest-ever acquisition financings.

The mega $48 billion Warner Discovery debt deal is being woven together by 22 banks. Here's the breakdown of one of the largest-ever acquisition financings. 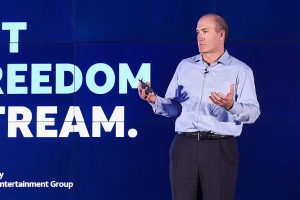 When WarnerMedia and Discovery said on June 1 that their new entertainment tie-up would pay homage to the tag line “the stuff dreams are made of,” from the film The Maltese Falcon, the same iconic line could be said to describe the jumbo financing opportunities that come with it.

Since AT&T agreed to spin off WarnerMedia and combine it with Discovery last month, bankers across Wall Street have worked furiously to get a piece of the new Warner Bros Discovery business, which boasts a content suite to match the likes of Disney and Netflix.

Goldman Sachs and JP Morgan won the prized mandate to lead a $47.5 billion funding effort, and have now spread the financing among 20 of its peers on Wall Street, according to bankers familiar with the deal.

Spokespersons for AT&T, Goldman Sachs, and JP Morgan were not immediately available to respond to a request for comment.

Saddled with one of the largest balance sheets in banking, JPMorgan is holding roughly $6.9 billion of the bridge loan, while Goldman Sachs has approximately $5.7 billion worth of the financing.

Santander, Commerzbank, MUFG, Scotiabank, TD Bank, Truist, and Wells Fargo have chipped in with $800 million each.

The $10 billion term loan is split between a $3 billion portion that will mature in 18 months and a $7 billion piece due in three years.

And the final piece is the revolving credit line, due in five years.

Warner Bros Discovery will pay lenders 1.375% in interest plus the London Interbank Offered Rate, a common benchmark used for bank loans, if it draws funds from the bridge loan, the sources said.

Banks are clamoring for the chance to be part of the jumbo financing effort, as it brings the potential for plenty of ancillary business opportunities. The bridge loan, for example, will eventually be replaced with bond sales.

And those willing to lend to Warner Bros Discovery in its infancy, may be rewarded for their loyalty, not only on this deal, but on future capital raising efforts as the new business looks to grow.

Corporate borrowing costs, meanwhile, remain cheap as the Federal Reserve keeps interest rates anchored. This has banks’ deal teams jockeying for front-row positions to lend and provide financial advice to companies looking to do deals and reward bankers with the lucrative underwriting fees that typically follow.

Now, with the syndication of the debt set, Goldman Sachs and JPMorgan will look to the capital markets for an ideal time to sell the bridge financing to third parties in the bond market.

AT&T pocketed some $43 billion after agreeing to spin off WarnerMedia and tie it up with Discovery. Goldman Sachs and JP Morgan committed $41.5 billion in unsecured debt to support the deal.

According to data from Refinitiv, the $41.5 billion in unsecured loans is the third-largest transaction of its type in the US loan market.

Beer brewer AB InBev’s $75 billion loan that funded its merger with peer SABMiller in 2015 is the largest so far, followed by a $61 billion bridge loan for Verizon Communications’ purchase of Verizon Wireless in 2013.