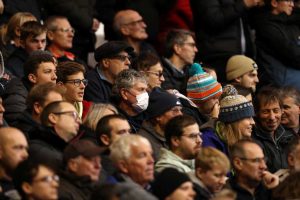 LONDON — The increase in omicron Covid cases in the U.K. is on such steep trajectory that the country has been warned to prepare for one million cases by the end of the month.

The UK Health Security Agency said Wednesday that omicron is displaying a significant growth advantage over the delta variant, "meaning that it is likely to outcompete delta in the U.K. and become the dominant variant."

This assessment is based on analysis of U.K. data showing increased household transmission risk, increased secondary attack rates (such as the chance of each case infecting another individual) and increased growth rates compared to delta, the UKHSA said.

"If the growth rate and doubling time continue at the rate we have seen in the last 2 weeks, we expect to see at least 50% of coronavirus cases to be caused by omicron variant in the next 2 to 4 weeks," it said in a statement.

Currently, the U.K. has recorded 568 confirmed cases of the variant, but the U.K.'s Health Secretary Sajid Javid told British lawmakers Wednesday evening that "we know that the actual number of infections will be significantly higher."

"At the current observed doubling rate of between two and a half and three days by the end of this month infections could exceed a million," Javid warned, saying the U.K. faced what he called the "twin threats from both omicron and the delta variant, which makes up the bulk, still, of global cases.

The omicron variant was first spotted in South Africa in early November and reported to the World Health Organization on Nov. 24. The WHO labelled it a "variant of concern" two days later, noting it had mutations associated with increased transmissibility.

Since then, the variant has been identified in 57 countries across the world, according to the WHO's latest tally, and there are increasing cases of community transmission with no links to travel.

Experts and vaccine makers have scrambled to assess the variant's risk profile. They are particularly focused on how fast it spreads, whether it causes more severe illness and could lead to an increase in hospitalizations and deaths, and whether it will undermine Covid vaccines.

Preliminary data, anecdotal evidence and a small number of early studies suggest that the omicron variant is more transmissible than the delta variant, but causes milder illness and could undermine the effectiveness of Covid vaccines currently in use.

However, the WHO's technical lead on Covid-19 stressed Wednesday that it is "too early to conclude" that omicron symptoms are weaker. The WHO Director-General Tedros Adhanom Ghebreyesus added that omicron could change the course of the pandemic.

A raft of countries responded to news of the variant by banning flights or introducing quarantines on visitors from southern African countries, where the omicron variant was first detected, as many are already dealing with a surge in delta cases as winter approaches.

The U.K. went further on Wednesday, advising people who could to work from home and introducing stricter measures on mask-wearing and the use of Covid passes.

There have been several pieces of both positive and negative news regarding the omicron variant this week, but global financial markets have rallied in recent days as traders bet that the omicron Covid variant's economic impact won't be as severe as initially feared.

Pfizer's CEO Albert Bourla said on Wednesday that people might need a fourth Covid-19 shot sooner than expected, while many countries are still rolling out third booster shots. Others are still trying to vaccinate their populations with a first set of shots, which help to reduce severe infection, hospitalization and death.

Bourla's comments came after preliminary research showed the omicron variant can undermine protective antibodies generated by the company's vaccine, which it developed with BioNTech.

The vaccine-makers released results from an initial lab study on Wednesday showed that a third dose of vaccine is effective in fighting the omicron variant, while the effectiveness of the initial two-dose vaccination series fell significantly.

"When we see real-world data, [we] will determine if the omicron is well covered by the third dose and for how long," Bourla told CNBC. "And the second point, I think we will need a fourth dose," he added.

Experts have urged caution, saying there are still unknowns about the variant.

Danny Altmann, professor of immunology at Imperial College London, told CNBC on Thursday that "the omicron data is enormously worrying," pointing to the U.K's 2.5-day doubling time of cases.

But Altmann stressed that the immunology landscape regarding omicron is not much worse than with the delta variant.

"If you've got booster, or have two doses plus prior infection, you're probably in the safe protective zone and that's looking true now in three different omicron studies, and in delta studies."