Home » Business » This NFL Team Has the Largest TV Market 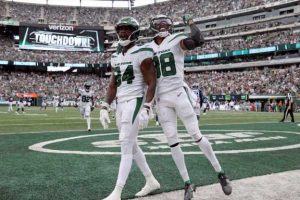 After dipping for several years, NFL ratings have risen by 10% for the current regular season. The viewership of NFL games has averaged 17.1 million people. This is good news for the league and team owners.

In the middle of last year, the NFL signed TV deals worth $100 billion. The deals take into account the changing ways that people watch games. Robert K. Kraft, owner of the New England Patriots and chair of the NFL’s media committee, said, “Over the last five years, we started the migration to streaming. Our fans want this option, and the league understands that streaming is the future.” Over-the-air broadcasts were the only way to watch games in the 1960s. Since then, the options have grown to cable and satellite. Now, people can even watch live games on their smartphones.

Team advertising revenue is not determined by market size. The NFL agreed long ago that this money should be split equally among teams, which miffed owners in the largest TV markets. At this point, each team receives about $300 million a year.

The size of the television audience varies wildly from market to market. Interestingly, some of the best teams based on win-loss records are in the smallest markets. The Tampa Bay Buccaneers, Tennessee Titans and Buffalo Bills are in tiny cities, based on television ratings.

American news website Axios did an analysis of TV market size by team. Among the conclusions:

The big picture: The AFC is the “small-market conference,” with just four of the top 17 NFL teams by media market size: Jets (t-1st), Chargers (t-3rd), Texans (10th) and Patriots (12th). The other 13 are all NFC teams, including the entire NFC East and NFC West.

Two of the worst teams in the recent history of the NFL are in the largest TV markets. Axios used Nielsen data to show that the New York market, home to the New York Giants and New York Jets, has 7.5 million homes. Next in terms of market size are the Los Angeles Rams and Chargers (although the Rams have moved) with 5.7 million.

These are the TV households for every NFL team:

Click here to see the largest and smallest NFL players of all time.