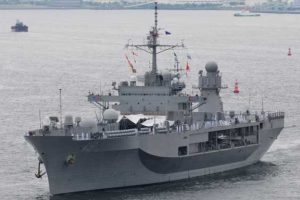 The U.S. Navy is in the midst of designing what it will look like in 2045. A recently-released overview of the Navy’s plans noted, “We will build future platforms with modernization in mind – hardware upgradeable and software updateable at the speed of innovation.” Here are 11 new warships that will join the U.S. Navy fleet.

Not every vessel needs to be brand new, however. The oldest operating ship in the Navy is the USS Blue Ridge, an amphibious command ship that was commissioned on Nov. 14, 1970, according to the Naval Vessel Register directory of commissioned ships in the U.S.

As it stands now, the bulk of the U.S. Navy is made up primarily of the destroyer fleet, which accounts for nearly 30% of all naval vessels. The submarine fleet comes in a close second, accounting for roughly a quarter of the total strength of the force. Beyond this, an aging fleet of cruisers, followed by littoral combat ships and amphibious assault support ships, account for the rest of the Navy’s vessels. (These are the 19 ships and submarines in the U.S. naval fleet.)

Among all these ships, the USS Blue Ridge plays an incredibly important role. It is the flagship of the huge 7th Fleet, which covers America’s naval activity in the Pacific. It is expected to stay in service well into the 2030s, largely due to a stretched Navy budget.

Since it was commissioned, the USS Blue Ridge has seen combat duty, particularly during the Vietnam War.

See 24/7 Wall St.’s list of the oldest ships and submarines still operating in the U.S. Navy.