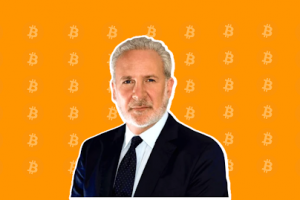 Peter Schiff is a businessman, investment broker, author, and financial analyst from the United States. He is the CEO and chief global strategist of Euro Pacific Capital, a foreign market investing firm. Schiff is well-known for his bearish views on the US economy and the Federal Reserve, as well as his criticism of government spending and economic intervention. He has also been widely critical of cryptocurrency.

He believes bitcoin is considerably closer to its ceiling than to its floor. The yellow line that was earlier considered support is now considered resistance. The wise course of action is to sell now because the upside potential is so small and the downside risk is so great.

However, BTC has performed exceedingly well since his prediction and has grown 27%.

Schiff continued to despise Bitcoin despite the fact that his recent price gains must have made him look ridiculous for encouraging $BTC HODLers to “drop Bitcoin.” Essentially stating that he anticipates “the entire rally” to reverse and for the price of Bitcoin to plummet below where it was at the start of its rally, Schiff once more advised people to sell.

Additionally, Schiff added that he does not expect ever recommending that people sell their Bitcoin after it reaches the $100K mark since he thinks it is “unlikely” that it would ever reach this price.

He continues to receive trolling as a result of this tweet. Some have highlighted the recent growth, while others have referred to him as a joke due to all of his inaccurate predictions. They have questioned his credibility due to his numerous errors.

Numerous optimistic forecasts have attested to the potential that Bitcoin would rise to unprecedented heights in the near future. Although the most popular digital currency is still well-known for its high level of overall volatility, many think the present trading setting and its technical indications are evidence that additional price upshoots for the coin may be on the way.

In the past, there have been many incorrect predictions made regarding Bitcoin, but Peter Schiff might find comfort in the knowledge that sometimes even optimistic projections are wrong.