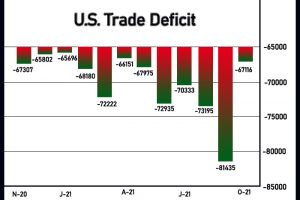 After reporting a record U.S. trade deficit in the previous month, the Commerce Department released a report on Tuesday showing the trade deficit narrowed significantly in the month of October amid a spike in the value of exports.

The Commerce Department said the trade deficit decreased to $67.1 billion in October from a revised $81.4 billion in September.

Economists had expected the deficit to narrow to $67.5 billion from the $80.9 billion originally reported for the previous month.

“While the trade balance is still $25.5bn larger than its pre-pandemic level, we expect stronger export growth and moderation in import volumes to keep the deficit stable next year after reaching multiple record highs in 2021,” said Mahir Rasheed, U.S. Economist at Oxford Economics.

He added, “However, the Omicron variant is a key downside risk that threatens to distort trade flows by slowing the global recovery in early 2022.”

The report showed a surge in exports of industrial supplies and materials as well as significant increases in exports of capital goods, foods, feeds and beverages, consumer goods and automotive vehicles, parts and engines.

Meanwhile, the Commerce Department said the value of imports climbed by 0.9 percent to $290.7 billion in October after rising by 0.6 percent to $288.2 billion in September.

Notable increases in import of automotive vehicles, parts and engines and consumer goods were partly offset by decreases in imports of industrial supplies and materials and capital goods.

The report also said the goods deficit narrowed to $83.9 billion in October from $98.0 billion in September, while the services surplus widened to $16.8 billion from $16.5 billion.