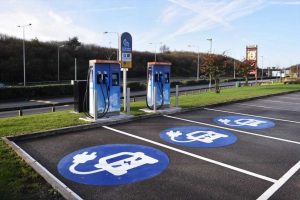 The U.K. government said Wednesday it wanted to create a net zero transport sector by the year 2050, as it looked set to publish details of a long-awaited decarbonization plan later today.

According to a news release from the government — the full report had not been made available as of lunchtime on Wednesday — a key part of the roadmap is a goal to "phase out the sale of new diesel and petrol heavy goods vehicles (HGVs) by 2040."

If realized, this ambition — which is subject to consultation — would complement the government's previously announced plans to stop the sale of new diesel and gasoline cars and vans by 2030 and require, from 2035, all new cars and vans to have zero tailpipe emissions.

Among other things, authorities are also targeting a net zero railway network by the middle of this century and want net zero aviation emissions by 2050.

The shift to a zero emission transport sector, the U.K.'s largest emitter of greenhouse gases, will require significant investment in areas such as charging infrastructure and the development of new systems and technologies.

In a written statement to the U.K. Parliament, Transport Secretary Grant Shapps said: "The plan published today is genuinely high ambition – technically and feasibly – for all areas of transport and notes that decarbonisation will rely, in part, on future transport technology, coupled with the necessary behavioural and societal change."

Electric vehicle company Nio can rally 50%, says HSBC as it upgrades the stock

Among those reacting to the plan were Helen Clarkson, CEO of international non-profit The Climate Group. "There is no world in which the decarbonisation of transport happens overnight," she said, "so we await further clarity from the Government around the timelines for these plans and encourage them to look beyond ambition to action."

Wednesday's announcement drew a mixed response from a wide range of stakeholders within industry. Elizabeth de Jong, Logistics UK's director of policy, said the government's plan would "help to provide logistics businesses with confidence and clarity on the steps they must take on the pathway to net zero."

"Consultation on proposed phase out dates for new diesel HGVs should enable business to move forwards with confidence," she added.

Elsewhere, the Road Haulage Association said that while it supported the decarbonization of trucks, the government's plan was "speculative, potentially damaging to business, and short on detail."

Richard Burnett, the RHA's chief executive, claimed that the proposal as it stood was "unrealistic."

"These alternative HGVs don't yet exist – we don't know when they will and what they will cost," he said. "It's also not clear what any transition will look like – this is blue skies aspiration," he added.