Home » Business » Up to 90% of Americans may have some form of Covid immunity after delta wave, Dr. Gottlieb says

Up to 90% of Americans may have some form of Covid immunity after delta wave, Dr. Gottlieb says 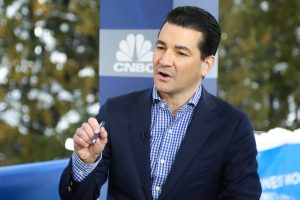 Dr. Scott Gottlieb told CNBC's Jim Cramer on Monday he believes up to 90% of U.S. residents will have some form of immunity protection against the coronavirus by the time the delta variant wave passes.

In an interview on "Mad Money," the former Food and Drug Administration commissioner said reaching that amount of coverage is important, even if the country never fully eradicates the disease.

As a result, Gottlieb said the highly transmissible delta variant — which currently accounts for nearly all new U.S. infections — will no longer spread from person to person as effectively.

"On the back end of this, you're going to have so much immunity in the population that the virus isn't going away — I don't think we're going to reach true herd immunity where this just disappears — but it's certainly not going spread at the kind of levels we're seeing right now," Gottlieb told Cramer. "The prevalence will decline."

Gottlieb, who now serves on the board of Covid vaccine maker Pfizer, said he expects infection rates to decline substantially around Thanksgiving, "barring something unforeseen" such as a new coronavirus variant that pierces prior immunity.

There have been roughly 43 million confirmed coronavirus infections in the U.S. since the pandemic began early last year, according to data compiled by Johns Hopkins University. However, experts say that's likely an undercount because not every person who is actually infected gets tested and shows up as an official Covid case.

Currently, 213.66 million people in the U.S., or 64.4% of the population, have received at least one Covid vaccine dose, according to Centers for Disease Control and Prevention data.

Only Americans ages 12 and up are currently eligible to receive a Covid shot, but Pfizer's two-dose vaccine may soon receive emergency use authorization from the FDA for those ages 5 to 11 after the company's clinical trials showed it generated a "robust" immune response. Pfizer is also studying the vaccine in kids under age 5, but data will take a bit longer to collect.

Moderna, which produces a vaccine that uses the same technology as Pfizer, is also conducting trials on its effectiveness in children. The company has said it could apply for emergency clearance with the FDA possibly by year-end.

Gottlieb has said vaccinating kids against Covid is an important step in turning the tides of the pandemic for reasons that include allowing vaccinated parents to worry less about bringing the virus home and making an unprotected child sick.