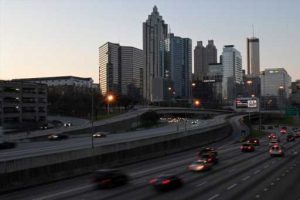 UTA is expanding to Atlanta, billing its full-service presence in the burgeoning entertainment and sports market as a first for any major Hollywood agency.

Klutch Sports Group, as part of the move, will continue to have its NFL representation business based in Atlanta, and enlarge its operations there. UTA bought a stake in Klutch in 2019, bringing LA Lakers stars LeBron James and Anthony Edwards into the agency fold.

Both UTA and Klutch already have a number of clients in the Atlanta area. The roster ranges from Trae Young, Jalen Johnson and Cam Reddish (all players on the NBA’s Atlanta Hawks) to musical artists 21 Savage and Offset to activist, political figure and author Stacy Abrams.

Atlanta has been expanding as a home for film and TV production, with a number of new soundstages coming online and potentates like Tyler Perry establishing a major footprint. A number of advertising agencies and digital firms have also set up shop along Peachtree Street. The Savannah College of Arts and Design, which puts on the well-regarded Savannah Film Festival about 250 miles east of Atlanta, also has an Atlanta campus, where it stages an annual TV festival.

The new office will be led by UTA partners Steve Cohen and Arthur Lewis and Klutch Sports Group CEO Rich Paul. Cohen, a senior agent in UTA’s motion picture talent group, and Lewis, creative director of UTA Fine Arts and UTA Artist Space, both have roots in the city.

Damarius Bilbo, head of football for Klutch, was a college football standout at Georgia Tech before going on to play in the NFL. He built a football representation business in Atlanta before Paul hired him in 2019 to help lead Klutch’s expansion into the NFL. Bilbo will also work at UTA’s new Atlanta offices, whose midtown location will be announced in the coming weeks.

In Atlanta, UTA will offer representation across all of its divisions, spanning music, sports, film and television, plus areas like podcasts, books and fine arts. The company expects to advise global brands based in the Southeast on ways they can partner with the creative community and, in so doing, forge stronger connections with their consumers.

“Atlanta is an epicenter of sports, music, art, business and culture,” said UTA CEO Jeremy Zimmer in the official announcement. “So much of what we watch, listen to, and cheer for comes from this critical region of our country. There is a huge and growing opportunity to connect talent with new possibilities that help them build their careers, where they live and on their terms. Atlanta represents so much of what’s next, and we look forward to being a meaningful and contributing member of the community.”

UTA also said it will establish a second UTA Artist Space gallery in its new Atlanta offices. The firm several years ago established a gallery near its Beverly Hills headquarters, helping to showcase its fine arts division. The new space in Atlanta will be open to the public and host exhibitions and programming from the regional art community as well UTA’s global fine arts roster.