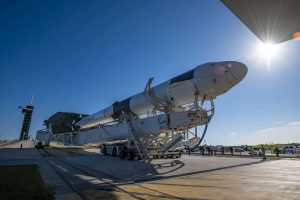 [The livestream is scheduled to begin at 1 p.m. EDT. Please refresh the page if you do not see the player above]

SpaceX plans to send the latest cargo mission for NASA to the space station on Thursday, with Elon Musk's company going for its 17th launch this year.

The company is targeting 1:29 p.m. EDT for liftoff of a Falcon 9 rocket from Kennedy Space Center in Florida. The mission, called CRS-22, will see SpaceX's Cargo Dragon spacecraft carry more than 7,300 pounds of research and supplies to the International Space Station. If the launch delays, a backup opportunity is available on Friday.

A few minutes after the launch, SpaceX will attempt to land the Falcon 9 booster — the largest, bottom portion of the rocket — on an autonomous ship in the Atlantic Ocean. The Cargo Dragon capsule will separate from the rocket about 12 minutes after liftoff, with the spacecraft expected to dock with the ISS on Saturday.

During a pre-launch press conference, SpaceX director of Dragon mission management Sarah Walker noted that CRS-22 is the fifth Dragon capsule the company has sent to the International Space Station in the past 12 months. The company has launched multiple crew and cargo missions in the past year, with a full slate in the year ahead as well.

Additionally, CRS-22 is SpaceX's 17th mission of 2021. The company is on a blistering launch pace, as missions are going up an average of every nine days since 2021 began.

SpaceX's current pace puts it on track to conduct about 40 launches this year, which would easily top its annual record of 26 launches set last year. It has launched 118 Falcon 9 rockets to date, landed 78 boosters, and reused boosters for 61 missions.

Walker also pointed out that CRS-22 is the first mission of this year to launch on a new Falcon 9 rocket booster, as the company has been reusing boosters for all its recent missions.

"We're actually surprised when we get to a mission [where we're] flying a new booster," Walker said.

CRS-22 carries dozens of research investigations for the astronauts on the ISS, including experiments about the survival of tardigrades in space, a portable ultrasound device, robotic operations demonstrations and more. Cargo Dragon is also bringing the first two of six new solar arrays called iROSA, built through Boeing and space infrastructure conglomerate Redwire Space. The new solar arrays are expected to improve the ISS' power generation by 20% to 30%.

This Cargo Dragon spacecraft is expected to return to Earth in July, splashing down in the Atlantic Ocean off the coast of Florida with 5,300 pounds of experiments and cargo.