10 ways blockchain developers can use ChatGPT 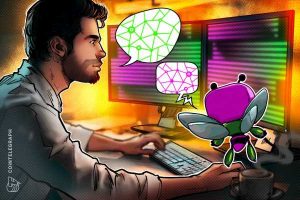 Blockchain technology has revolutionized the way we think about data storage and transactions, but it can also be a complex field for developers to navigate. One tool that can help simplify the process is ChatGPT, a large language model created by OpenAI.

A language model is a type of artificial intelligence model that is trained on a large corpus of text to generate or predict text. It can be used to generate new text, such as in machine translation, or to predict the likelihood of a sequence of words. It uses natural language processing and machine learning techniques to learn the structure and patterns of the language.

Here are 10 ways blockchain developers can use ChatGPT to improve their work:

ChatGPT can be used to generate smart contract code by inputting the desired parameters and conditions, saving developers time and reducing the risk of errors. In addition, it can generate natural language explanations of the contract’s logic and functionality and provide examples of how the contract could be used in various scenarios. 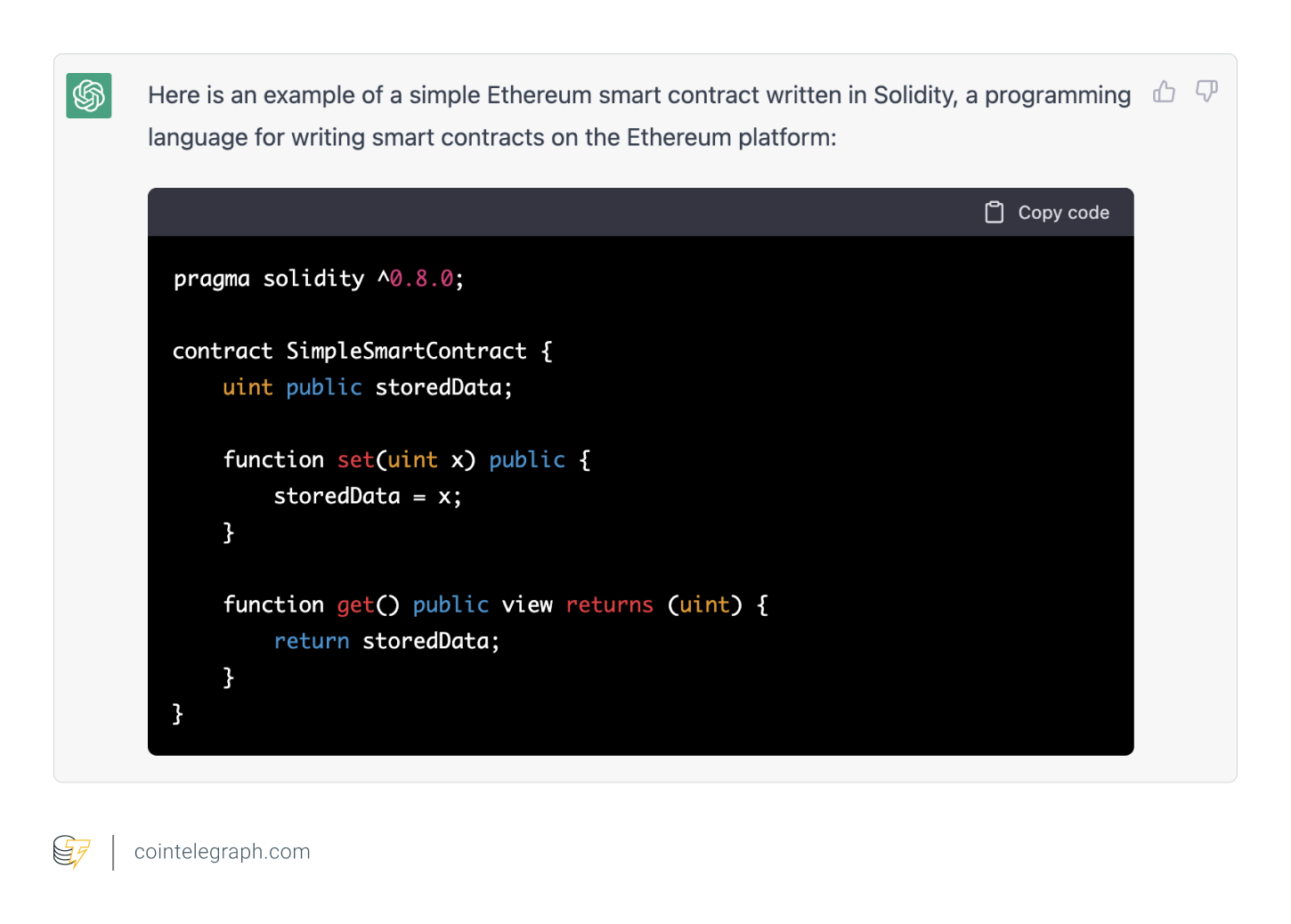 Moreover, ChatGPT can generate sample code snippets that can be used to implement the contract’s logic. This can help developers better understand the contract’s requirements and can serve as a starting point for the actual implementation.

ChatGPT can also be used to generate detailed documentation for smart contract code. This can include descriptions of functions, classes and variables, as well as examples of how to use the code. A function is a “chunk” of code that programmers may reuse repeatedly rather than having to write it out several times.

When creating several instances of a certain data type, a programmer can reuse information about that data type by arranging it into a class. A variable is a value that is subject to change based on external factors or data given to the program.

Additionally, ChatGPT can generate documentation templates and integrate with code comments to make the process of documenting the code more efficient. This can be particularly useful for projects with multiple developers, as it ensures that everyone is on the same page and can easily understand the codebase.

ChatGPT can be used to help manage and engage with the community of a blockchain project. ChatGPT can assist with community management by providing automated responses to frequently asked questions, moderating conversations to ensure they stay on topic and follow community guidelines, and generating content such as blog posts or social media updates to engage and inform the community.

Related: How to prevent AI from ‘annihilating humanity’ using blockchain

Additionally, ChatGPT can be used to analyze and report on community engagement and sentiment, which can be useful for making data-driven decisions about community management models and strategies.

ChatGPT can be used to analyze market trends and conditions for a particular blockchain project or the industry as a whole. This can help developers make informed decisions about their project’s direction and future developments. For example, it can be trained on historical market data and used to generate predictions about future market trends.

Furthermore, it can also be used to analyze large amounts of unstructured data, such as news articles or social media posts, to identify sentiment and opinions about specific companies or products. Additionally, it can be used to generate natural language reports and summaries of market data, making it easier for analysts to understand and communicate their findings.

Blockchain developers can use ChatGPT for simulation in the following ways:

ChatGPT is a language model, and its application is limited to text-based systems. Developing a decentralized application (DApp) using ChatGPT can be done in various ways, as explained below:

However, the text generated by ChatGPT needs to be edited and refined by the developers to ensure that it accurately and effectively explains the concepts and features of their blockchain project.

White paper development using ChatGPT can be done by fine-tuning the model on a data set of existing white papers or by providing it with specific prompts and guidelines to generate text. The process would involve training the model on a data set of relevant information, such as industry terms and technical details, and then using it to generate text that adheres to a specific format and tone. Additionally, providing the model with information about the intended audience and purpose of the white paper can help ensure that it generates content that is tailored to those factors.

ChatGPT can be used to detect and fix bugs in smart contract code. By inputting the code and identifying the problem, ChatGPT can generate the necessary fix, reducing the time and effort required to resolve the issue. Several ways in which it can be used are listed below: 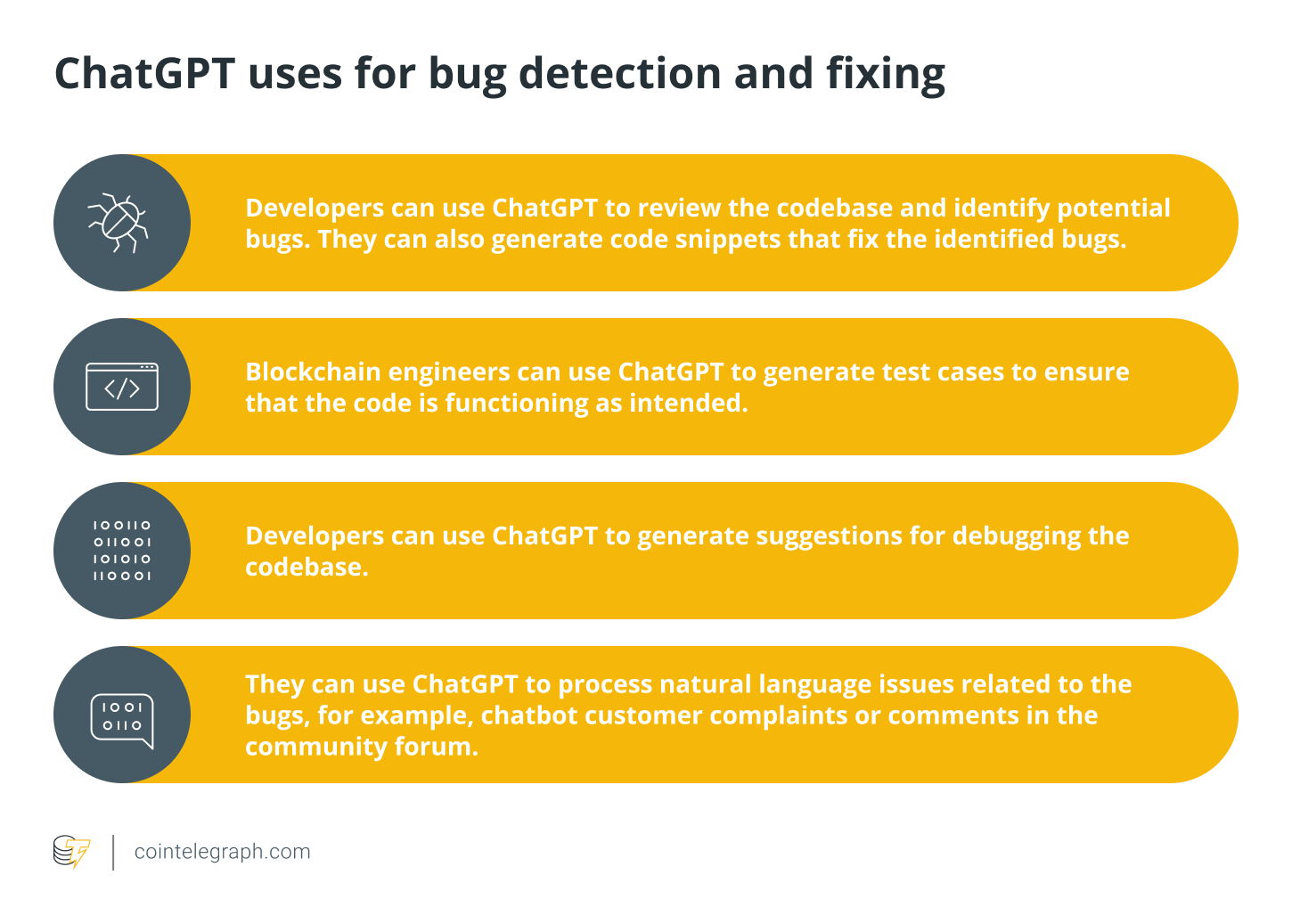 It’s important to keep in mind that these are potential use cases and that the actual outcome may vary depending on the specifics of the project and the quality of the data set used to train the model. In addition, it’s important to validate the results generated by the model with programmers.

The future of ChatGPT

ChatGPT is a powerful tool for blockchain developers that can be used to streamline the development process and engage with the community. Whether they are developing smart contracts, tokens or DApps, or conducting a market analysis, ChatGPT can help them save time and effort while increasing the quality of their work. As blockchain technology continues to evolve, the use cases for ChatGPT in this field may also expand.