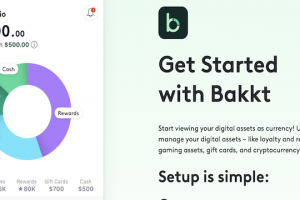 Bakkt ($VIH), the company that was launched in 2018 by Intercontinental Exchange and known for its digital currency custodian services, has just launched a digital asset marketplace. The Bakkt App allows users to buy, sell, and hold digital currency as well as aggregate their digital assets outside of blockchain–such as loyalty reward points and gift cards.

“The average consumer holds a wealth of digital assets – from gift cards to loyalty points to bitcoin – but lacks the tools to adequately track and utilize their value,” said Bakkt CEO Gavin Michael. “We’re thrilled to bring the Bakkt App to the public as a step along our journey to expand digital asset access to all.”

Bakkt App seems to be paving the way for interoperability between digital assets; for instance, it looks like Bakkt would like to let its users to transfer their loyalty points from one company, into a gift card being provided by another company. In other words, they are looking to create a bridge that allows direct transfer between digital assets.

“We’re really here to help empower you to track, spend, and send your digital assets however you want. So what is game-changing about our wallet is that it brings together all forms of digital assets in one place. So there’s no more siloed apps to track everything,” said Michael in a recent Yahoo Finance interview.

“We really are trying to empower the consumers to use their digital assets as they feel fit. So that’s why we take such a broad definition of digital assets. It’s not just about cryptocurrency. It’s about all forms of assets that we have today in our wallets but are generally stored in a very distributed way. And we’re all about bringing it together, putting it in one place, and allowing you to really gain value from potential liquidity you didn’t know you had.”

Where to find the Bakkt App.

The Bakkt app is currently available on iOS and Android, and Bakkt users can already cross-transfer their digital assets among several Bakkt partners.

One of Bakkts launch partners is Starbucks, if you are wondering how Bakkt allows interoperability between its partner’s digital assets, Bakkt’s official announcement summarizes how it can be used via a Starbucks example.

“This new digital experience introduces a new payment choice for Starbucks customers, who can convert supported loyalty and rewards points, bitcoin, frequent flyer miles, and gift cards in the Bakkt App into USD to then reload their Starbucks Card saved in the Starbucks app.”

As time goes on, you can expect even more of your favorite companies to be compatible and interoperable with the digital assets available through the Bakkt App.